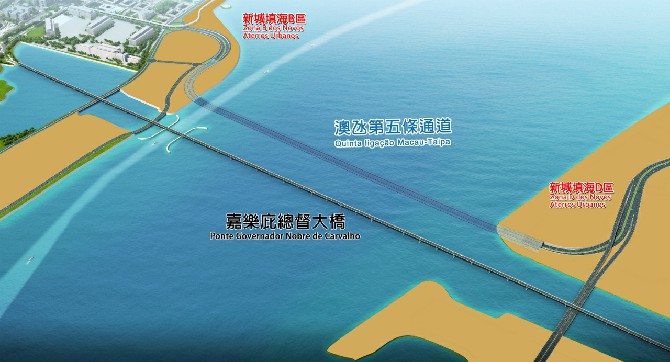 The Macau SAR government is continuing with its plans for a fifth cross-water link between the Macau peninsula and Taipa, according to Chan Pou Ha, Director of the Land, Public Works and Transport Bureau (DSSOPT).
On the sidelines of yesterday’s Urban Planning Committee plenary meeting, the DSSOPT director responded to the government’s 2020-2040 Macau Urban Master Plan, particularly related to the possible scrapping of the New Urban Zone D reclamation project, which was also one endpoint of the fifth cross-water channel between the Macau peninsula and Taipa.
As of yesterday, the DSSOPT has been continuing examinations and research for the fifth Macau-Taipa link project. The government has not yet figured out a final solution for the fifth channel.
According to Chan, as of yesterday, her bureau has not received orders from her superiors to abolish the fifth link plan.
“Actually, we have not received any notification regarding any kind of change of plans,” said Chan.
Chan was reluctant to disclose further details regarding where the future fifth cross-water link will be located on the Macau and Taipa sides.
The DSSOPT director also remarked that it is still too early to discuss the fifth link.
Regarding the cessation of work on New Urban Zone D, Chan commented that “the Chief Executive has clearly instructed that Zone D is currently at the public consultation stage.” She urged members of the public to give their opinions on the urban master plan.
The fifth Macau-Taipa link is planned as an underwater tunnel which will link New Urban Zone B and the undecided New Urban Zone D.
Providing that there are no changes made to its original plan following the consultation process, the tunnel will be built next to the Governador Nobre de Carvalho Bridge and will have a length of approximately 2,400 meters.
It would start at the intersection between Avenida Dr. Sun Yat-Sen and Avenida 24 de Junho next to Zone B and end at a road in Zone D.
Yesterday, Chan brought a total of 22 land plans to the Urban Planning Committee for approval. Four of those plans are public projects, including three government facilities.
The government plans to build one theater and one transformation station in the proximity of the Macao Culture Center, on top of a land plot near Avenida Xian Xing Hai. The maximum height is 15 meters for the former and five meters for the latter. The representative of the Environmental Protection Bureau, Vong Man Hung, reminded the DSSOPT to carry out an environmental impact evaluation for the transformation station before the project is commenced.
A rectangular land plot surrounded by Rua do Porto and Rua Cidade de Braga will be used to build a government office building, according to the plan.
Three members of the committee proposed that the DSSOPT build more parking spaces at this government building, and advisor Lou Chon U said that that the concerned area lacks parking spaces, a youth activity center, a senior’s activity center and public libraries.
Responding to the advisors, Chan indicated that the government has no intention of creating more parking spaces in this area, especially not underneath the government building. According to Chan, the public works authority is not inclined to dig deeper into the underground spaces in the concerned area. In regard to social facilities, the authority also has no plans to build more.
Moreover, the committee also approved the construction of two government buildings in Cotai and Taipa.
In Cotai, near the cluster of integrated resorts, there will be the Light Rapid Transit depot and a government office building. The buildings will be located on the land plot between Avenida de Aeroporto and the Rotunda da Aeronáutica. The maximum height of the buildings is 53 meters.
The other building will form government archive storage and will be situated nearby the Avenida Son On and Rua Heng Long. The building should not be higher than 50 meters.