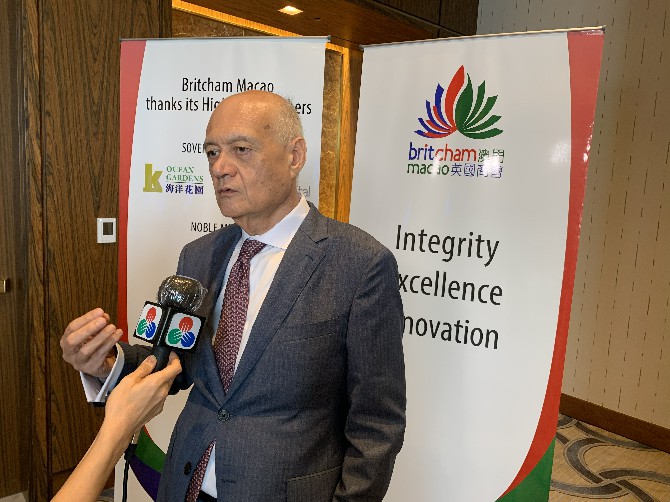 Exports of financial services are growing at faster rate than gaming services, according to local economist José Luís de Sales Marques, and have been since at least 2002.
Financial services exports grew at an average annual rate of 17.5% per year between 2002 and 2019, compared to an average of 14.1% annual growth in gaming services, according to government data cited by the economist in a presentation organized yesterday by the British Chamber of Commerce in Macao. The average annual growth in exports of all services grew on average by 11.6% per year during the same period.
“Macau institutions and residents are investing outside of Macau. This is the reason that this [sector] is growing so fast,” said Sales Marques, when questioned on the rapid rise.
The casino sector has long been the main driver of Macau’s economy. Last year, gambling directly accounted for about of the local economy and cast considerable influence on much of the rest.
In its pursuit of economic diversification, the Macau government has recently returned to the idea of cultivating financial services. In addition to the establishment of Macau as a center for yuan settlement, financial authorities are also studying whether to develop a securities market centered around trade with Portuguese-speaking countries.
However, according to Sales Marques, Macau lacks the homegrown talent to build this industry. Economic planners will have to look beyond Macau’s borders.
“Whether this can have a sustainable impact on Macau’s diversification [is to be seen],” said Sales Marques yesterday. “Financial services are very complex […] and require a very specialized type of workforce. I am not sure whether at this moment Macau has enough experts in that area or the infrastructure even to do that. Macau needs a lot of experts and they must come from outside. So this is the main problem.”
Sales Marques delivered a presentation yesterday about China’s Belt and Road Initiative.
Announced in 2013 by Chinese President Xi Jinping, this strategic initiative is an infrastructure project that seeks to redesign global trade flows.
The economist said that the initiative was “a very elastic concept that can be adapted to any [geopolitical] reality.” This means that even though some countries, such as Sri Lanka and Malaysia, are now reviewing their involvement in the project, “no single setback will jeopardize it. If one country does not want to be a part of it, their neighbor might.”