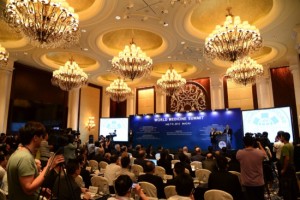 A number of world-renowned medical scholars and leaders in the field of public health policy launched the World Medical Summit (WMS) in Macau yesterday to share knowledge and experience in pressing topics concerning today’s global medical community.
Jointly organized by the WMS Organizing Committee and the Macau University of Science and Technology (MUST), the three-day conference is recognized as a “historical event” for the region’s medical community, comprising over forty leading figures in the field, including Nobel laureates, Lasker Awards winners, health ministers, and respective chairmen of the Chinese Medical Association, Sweden Nobel Foundation and European Molecular Biology Organization, as well as editors-in-chief of Science and Nature journals and advisors of the World Bank.
The summit’s founding chairman, Jiang Shuiping, told media representatives that it aims to “serve as a channel to integrate the world’s medical resources – including governments, experts, medical foundations and publications – to explore effective means to tackle the new trends in public health and incurable diseases.”
“For example, resistance to antibiotics is going to be a critical challenge which all governments will face in the next decade, as well as cancer and Alzheimer’s disease. These are the issues we will discuss,” he added.
The conference will comprise lectures, roundtable discussions and symposiums to facilitate dialogue on a wide range of medicine-oriented topics, such as controlling Ebola, avian influenza and Middle East Respiratory Syndrome; tackling cardiovascular illnesses; climate change and health; PM2.5 and respiratory diseases; as well as the internationalization of traditional Chinese medicine.
Israeli Nobel laureate Aaron Ciechanover, who will give a speech on personalized medicine, stated at the opening ceremony that there are still many diseases, especially emerging infectious diseases, that have yet to be studied, and demanded that effective treatments be investigated in a timely manner. He stressed that it is crucial for scientists to collaborate closely and for societies and governments to financially support these collaborations, in order for this summit to make an impact.
The MUST rector, Liu Liang, also expects the conference to unveil important aspects of the city’s medical science development. He noted that the guest speakers are either renowned scientists who have made exceptional contributions to medical development or outstanding leaders with major contributions to public health policy. “I believe this summit will not only enable Macau’s medical science and technology to achieve greater development, but to also have a significant and profound impact on advances in modern medicine, traditional Chinese medicine, and the cause of human health,” he stressed.
The rector further acknowledged that “human health has been improving continuously; however, whether in developing or developed countries, changes are happening quietly in the spectrum of diseases, and some chronic non-contagious diseases and major new epidemics are seriously threatening people’s health.”
“To conquer such challenging medical problems, to alleviate the pain caused by diseases, and to maintain and improve human health have become worldwide concerns that require the combined efforts of all countries. The establishment and consolidation of interdisciplinary, coordinated, practical and mutual cooperation have become an urgent need,” he added.
Moreover, Mr Jiang Shuiping said that the organizers also expected to “improve Macau’s current level of research in medical science and health through hosting the summit, as it can be a platform for Macau to further its efforts and to better exchange ideas with the international community.”
Commenting on the region’s medical education and research facilities, Jiang noted: “Some experts have also raised the question as to why Macau hasn’t established a medical school so far.”
“So we also hope to use this occasion to suggest the government build a world-class medical school. (…) The government and local universities could introduce incentive policies to attract talented professionals and leading medical practitioners from other places so that they can be more confident to come here to advance Macau’s medical development,” said the professor.