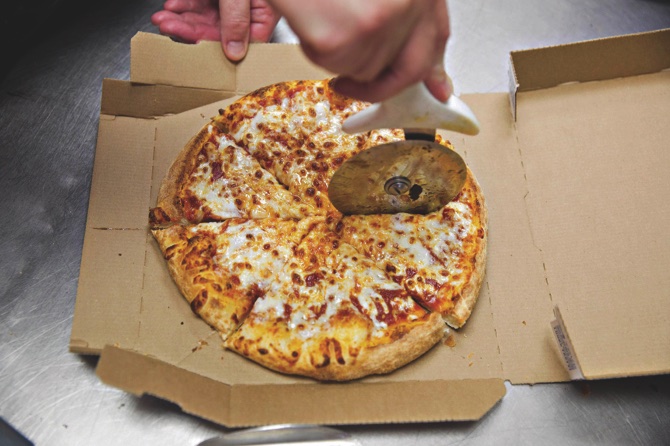 Americans love their cheese, but maybe not as much as dairy farmers do.

Even after people cut back on milk use for decades – a consequence of more drink options including juices, sodas and sports drinks – U.S. cows are producing the most ever. While the glut has eroded dairy income, the industry is getting a jolt from demand for high-fat byproducts that have given the world creations like the Grilled Cheese Stuffed Crust Pizza and led McDonald’s Corp. to start using butter on its Egg McMuffins rather than margarine.

The jump in total domestic cheese consumption over the past two years was the biggest since 2000, with Americans eating the most on average since the government began tracking the data in 1975. Butter demand also advanced, and more gains are expected this year. The sales surge is helping to boost slumping U.S. milk prices at a time when surpluses forced production cutbacks in most of the world’s major exporters.

Total domestic consumption of fluid milk has tumbled for six straight years and is forecast to drop again in 2017, the U.S. Department of Agriculture said in a report last month. Americans on average are drinking about 70 kilograms each annually, down by one-third from 1980. At the same time, production touched a record for a seventh straight year and probably will surge this year, the government said.

Some of that gap is being made up by domestic cheese consumption, which reached a record 5.35 million metric tons in 2016, up 7.6 percent from two years earlier, the USDA said. Americans on average are eating 35 pounds each annually, or twice the amount in 1980. Butter use was an all-time high of 870,000 tons last year and is forecast to jump 8 percent in 2017, the government said.

Sales at pizza chains have bucked a slump across the restaurant industry, as consumers embrace cheap, easy-to-get food. Pizza Hut, a unit of Yum! Brands Inc., launched a Grilled Cheese Stuffed Crust Pizza in September, with cheddar and mozzarella baked into a butter-topped edge. A new pan pizza from Papa John’s International Inc. – already laden with cheese baked on top – features more sprinkled to the edge of the crust.

Even among carbohydrate-avoiding consumers who eschew bread, unprocessed fats like butter are seeing renewed appeal because they are now viewed as more healthy, Credit Suisse Research Institute said in a 2015 report. Global demand for fats will rise 43 percent by 2030, fueled by increased shifts toward dairy, eggs and red meat. The National Restaurant Association forecasts “artisan cheeses” among the top trends in 2017.

“There’s been a shift in sentiment around milk fat, and it’s not just one category – high-fat yogurts to sour cream to whole milk,” Tom Bailey, New York-based senior dairy analyst for Rabobank. “When you start to tally all this up, we’re left with less fat to go around in general, relative to how demand is growing. It’s kind of left us a little tight considering how much milk supply we have.”

That’s helped to revive prices. After touching a six-year low in May, class III milk futures, the variety used for making cheese, ended last month at USD17.39 per 100 pounds on the Chicago Mercantile Exchange, a 26 percent gain for the year. The January contract closed on Tuesday at $16.80. The USDA forecasts farmers will see a 7.1 percent increase in what they are paid for milk in 2017, and cheese prices will reach to a three-year high.

The price is “not in a raging bull market,” said Eric Meyer, president of HighGround Dairy in Chicago. “But it’s much higher than we would have expected given the domestic fundamentals.”

The rally is helping to improve prospects for the U.S. industry, especially for dairy operations that saw average cash income drop to a six-year low in 2016, government data show. Shares of Dallas-based Dean Foods Co., the largest U.S. dairy processor, are near a three-year high.

Even with the improved demand, supplies remain ample. The U.S. had 1.2 billion pounds of cheese in chilled inventory at the end of November, the most for the time of year in three decades, government data show. Cash receipts from dairy products last year probably fell to $33.9 billion, and the USDA stepped in to buy $20 million of cheese in August to help stem farmer losses.

American dairy exporters may lose some sales with the dollar near a 13-year high against the euro, and a rebound in international prices may mean more competition for market share, according to the USDA.

“The tide is changing,” said Nate Donnay, INTL FCStone’s director of dairy market insight. “We’re working through this contraction driven by low prices in early 2016. The story for 2017 is going to be how quickly the milk supply in other countries turns around to growth.”

For now, U.S. supplies will be “inevitably” be needed to fill global shortfalls of cheese and butter in 2017 because others don’t have surpluses, Rabobank said in a December report. Stronger economic growth also may boost domestic sales, as consumers are more willing to splurge on specialty products, the bank said.

“We’ve had two solid years in a row of increases in domestic consumption,” said Mattke at Stewart-Peterson. “The focus has been so much on the supply side that the whole other part of the equation has been totally overlooked.”