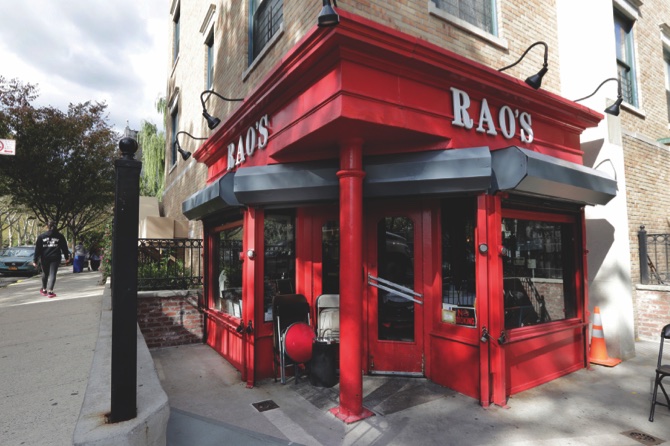 So one night, the story goes, Justin Bieber was in town (NYC), and had a hankering for Italian food. Not just any Italian, but Rao’s, the tiny restaurant by a park in East Harlem that’s been around for 120 years — and is one of the hardest-to-get tables in the country, let alone the city.
Some “serious society types” made inquiries for Bieber, according to an anecdote in the new cookbook, “Rao’s Classics.” But the place was booked with regulars, as always. Would heaven and earth be moved? The answer came crisply and succinctly: “No one gives a [blank] about Justin Bieber.”
Many things are said to be impossible in Manhattan. A taxi at rush hour in the rain. A parking spot on a Saturday night. “Hamilton” tickets in the current century.
But let’s be precise. Those things are difficult, but not impossible.
You know what’s impossible? Getting a reservation at Rao’s.
The first thing to know is that Rao’s has only 10 tables, serving 60-ish diners a night — one leisurely seating only (and no lunch). The next is that these tables have been assigned for years. People have their regular nights. A table can be handed down in a family, or gifted to a friend for a night, or auctioned for charity at many (many!) thousands of dollars for an evening.
As the Zagat guide says, it “practically takes an act of Congress” to score a table.
And so, visiting Rao’s one day recently, some five hours before doors open, one of our first questions is whether there’s ever been a thought to shaking up the system — maybe getting a bunch of fresh blood into the doors. 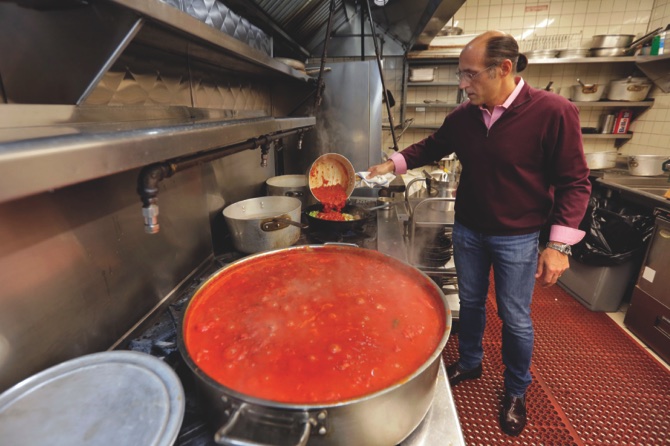 Frank Pellegrino Jr. co-owner of Rao’s, prepares fusilli with cabbage and sausage as a pot of his signature sauce bubbles on the stove

That, says co-owner Frank Pellegrino Jr., is really missing the point.
“I’ve known many of these guests since I was a kid,” says Pellegrino, 46, whose first job at Rao’s was a summer gig in 6th grade. “There’s a bond. It’s about preservation of relationships.”
If you really want a table at Rao’s, probably the best place to try is in Vegas, where the 10-year-old Rao’s at Caesar’s Palace occupies 10,000 square feet — “about five New York Rao’s in one,” quips Pellegrino — serving 400-600 people a night (and 800 large meatballs a day). There’s also been an outpost in Hollywood since 2013.
Pellegrino Jr. spends most of his time out west, while his father, Frank Sr., presides over the Manhattan locale, which opened in 1896. Coming back to New York feels like a reunion, he says. Still, “I only get to eat here when I’m working or when I cook myself” — which is what he’s doing at 1 p.m. when we arrive.
The place is quiet, very quiet. Lights are still off in the dining room. But in the kitchen, a huge pot of marinara sauce is being tended by Paulie Sanchez, who’s been with the restaurant some 15 years. Pellegrino, meanwhile, is whipping up some fusilli with cabbage and sausage. The recipe appears in the new book, with about 140 other favorites.
On a tiny shelf — there’s not much wall space — sits a jar of the famous Rao’s sauce sold in stores by the restaurant’s specialty food business. That business — and the handling of it — is currently the subject of a lawsuit in state court that has, according to tabloid reports, caused a bitter rift between Pellegrino Sr. and his cousin and co-owner, Ron Straci, and his wife Sharon.
Pellegrino Jr. will only say that the lawsuit is ongoing but he’s hopeful it will be resolved soon.
But it’s hard to say the lawsuit is the most dramatic calamity to befall the restaurant — not with the murder and all.
It happened, as the book recounts (authors are the two Pellegrinos and Joseph Riccobene), around Christmas 2003, when a young actress was serenading diners with “Don’t Rain On My Parade.” A man at the bar “uttered unkind words.” An older man, a mobster nicknamed “Louie Lump Lump,” admonished him, more insults were traded, and Louie ended up pulling a gun and killing the younger man.
It didn’t hurt business. 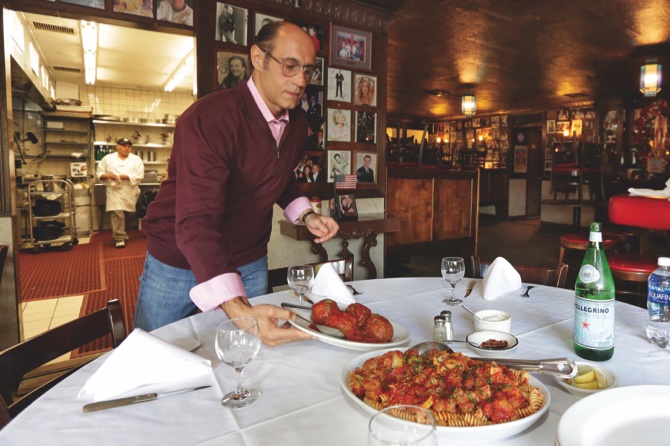 “I was here that evening,” says Pellegrino Jr. “It was a very unfortunate incident — we always viewed Rao’s more like Switzerland than anything else.” He adds that rumor has it there was an earlier shooting “back in 1911 or 1912. A woman sitting here at the bar, a stray bullet from outside. I can’t confirm it.”
But back to the food. Pellegrino’s favorite dishes include the pork chop with cherry peppers — a 450-year-old recipe — and the shells with ricotta. The seafood salad is very popular. But probably the one thing Rao’s is best known for is its meatball – about three times the size of a normal one. Initially, meatballs were served only on Wednesdays. But demand was too great to limit the dish.
Rao’s walls are plastered with photos of the celebrities that have passed through — usually as guests of regulars. Hillary Clinton’s picture is there, from her Senate years; Donald Trump has also visited. Hollywood stars galore. And many cast members of “The Sopranos.”
One regular was sportswriter Dick Schaap, who died in 2001. At his funeral, Billy Crystal noted in his eulogy that everyone was thinking the same thought.
“Who’s going to get his table at Rao’s?” Jocelyn Noveck, AP