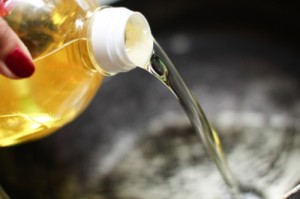 In a statement released by Tai Heng Foods yesterday, the Macau importer that represents the embattled Taiwanese food oil producer Chang Guann Company has criticized the authorities of making false claims before confirming the information they received.
The company said that it would reserve the right to take action in the matter.
Tai Heng said that Chang Guann Company has already assured the authorities that the special lard sold through the Macau importer has no unqualified food oil or illegal additives mixed into it.
They further claimed that the lard matches the food safety standard of the European Union (EU).
As for the problematic fragrant lard oil that Tai Heng also sold, the importer said that it has also met the standards of the Taiwanese authorities and the EU.
Tai Heng alleged that the Civic and Municipal Affairs Bureau’s Food Safety Centre provided an incorrect overview of the situation before verifying the information.  As such, it is believed to have caused panic among residents, and brought economic loss and reputation damage to businesses using the two types of Chang Guann lard.
It claimed that IACM should take full responsibility for the affected businesses. The importer may also take action against the bureau on their behalf.
Meanwhile, Leung Veng Han, head of the Food Safety Centre, said that she understood that Tai Heng has fulfilled its obligation in the incident. The department head added that she has no information regarding Tai Heng’s claim that allows her to provide any response.
Moreover, Leung Veng Han claimed that the authorities’ instructions to temporarily seal the food oil in question is a preventative measure aimed at protecting public health.
She said that Macau has received inconsistent information since the outbreak of the Taiwanese tainted oil scandal.
Once Macau authorities have received more information from their Taiwanese counterparts, Ms Leung said that they may take further actions. JPL