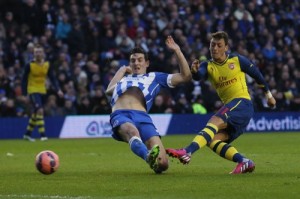 Arsenal, West Ham and Aston Villa redressed the balance for Premier League teams after a flow of upsets in the FA Cup, securing narrow wins over awkward lower-
league opposition to advance to the fifth round on Sunday.
Chelsea and Manchester City were among five teams in the Premier League’s top nine to be eliminated on Saturday on one of the most astonishing days in the famous competition’s 144-year history.
The underdogs couldn’t continue the shocks a day later, with Arsenal beating second-tier Brighton 3-2 after being set on its way by early goals from Theo Walcott and Mesut Ozil. Tomas Rosicky was the other scorer for Arsenal, which is looking to retain the trophy and, as the fifth-place team in the top flight, is the highest-
ranked side guaranteed a spot in the last 16.
Senegal striker Diafra Sakho came off the bench and scored an 81st-minute header to earn West Ham a 1-0 victory at Bristol City, which is second in English football’s third tier.
Villa had the toughest assignment against second-tier leader Bournemouth but came through with a 2-1 home win, with new signing Carles Gil — with his first goal since moving from Valencia — and Andreas Weimann scoring for the Premier League side.
The FA Cup was thrown wide open after Saturday’s remarkable events, when Premier League leader Chelsea squandered a two-goal lead to lose 4-2 to third-tier Bradford and English champion Man City was beaten 2-0 by second-tier Middlesbrough. The fourth-round surprises began Friday, with Manchester United held to a 0-0 draw by fourth-tier Cambridge.
Any sense of another upset at Brighton’s Amex Stadium was snuffed out by the 24th minute, by which time Arsenal had sped into a 2-0 lead.
Walcott put Arsenal ahead in the second minute when he controlled a cross and drilled a low finish under the goalkeeper. Ozil, making his first start since October because of injury, then was found by a probing pass from Rosicky and placed a low finish into the corner.
“The results from yesterday maybe got us on our toes and we got off to a quick pace,” Arsenal manager Arsene Wenger, “and I think that surprised Brighton.”
Sloppy defending allowed Brighton to reduce the deficit through Chris O’Grady in the 50th but Rosicky restored Arsenal’s two-goal lead by volleying in from the edge of the area. Sam Baldock lifted a neat finish over Arsenal goalkeeper Wojciech Szczesny in the 75th to set up a tense finish. AP