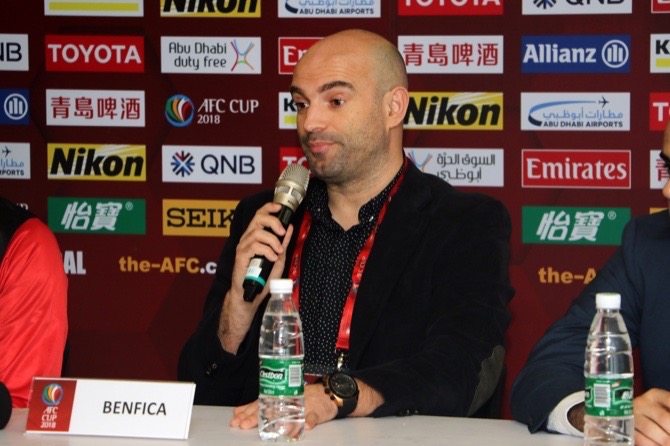 Football club Benfica de Macau is ready to participate in the Asia Football Confederation (AFC) Cup 2018 group stage. Several Benfica representatives have acknowledged this opportunity as “unique” with team coach Bernardo Tavares saying, “we are going to try to do our best since this is a unique opportunity for Benfica de Macau and for Macau’s football [in general].”

Tavares was launching the match, scheduled for today, at the pre-match press conference held yesterday afternoon at the Macau Stadium. In the coach’s opinion, “the fact that we play the Taiwan team in the first home match can be an extra motivation, since theoretically it is the easier team [from the group].” Tavares went on to promise that Benfica will be “a fierce team and a team that will fight for the 3 points [match win].”

In response to the reports that Benefica is the favorite to win, Tavares said the fact that Benfica has already completed six championship matches this season in comparison to the opponents, whose championship has not started yet, might play in favor of the Macau team. However, he went on to add that, “the fact they haven’t yet started the championship also provides a surprise factor, as we [don’t have a] chance to access data and video to study the team. Our only footage of an official match from the Taiwan team goes back to last season’s final match in November.”

Benfica’s president, Duarte Alves, said that “this participation is an all new chapter in the history of Macau football,” adding, “I hope these six matches […]can give a good image of football in Macau and that [that will] further motivate the population and the press to follow the ‘King of the Sports’ in the MSAR and obviously to get a wider exposure from the club and from our sponsors that grant the chance for us to [play] here.”

Alves also hopes that other local teams will learn and be motivated to believe that it is possible to play at this level and to host these kinds of games in Macau. The president believes the example will spur local teams on to work harder individually and collectively “elevat[ing] the level of football in Macau.”

On the side of Hang Yuen FC, the coach Hung Chin-Hwai hopes that it will be a very competitive match, remarking that there are no favorites; “[i]t’s 50-50,” Hung said. Still, he hopes to win the match and to give victory to the club but also to Taiwan, as he feels the responsibility of being the first Taiwanese team playing in the AFC Cup competition.

A Haitian player of Hang Yuen FC, Jean-Marc Alexandre, said “the team is prepared, we have been physically prepared for the match by the coach and team staff, we are now only missing the mental part which is the game itself to be played […] I can say that everyone is really excited for the game and to show everyone what we can do.”

To prepare the team for the match against Benfica, coach Hung noted that they have been doing “video analysis, and [could observe] that Benfica plays strong football but my team is good in pressing and movement so I expect a good match.”

Remarking on the group teams and upon which teams he believes to be stronger sides, Hung noted, “Probably [North Korea’s] 4.25 SC team, as they are the most experienced team and have several players playing in their national team.”