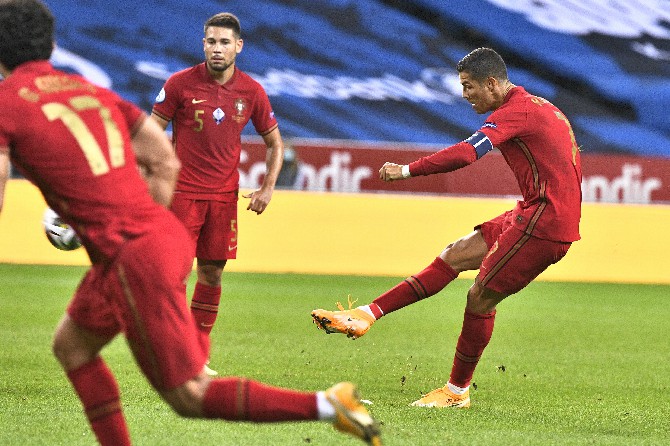 Add 100 international goals to the extraordinary list of milestones achieved by soccer superstar Cristiano Ronaldo.
The 35-year-old Ronaldo become just the second male player to reach a century of goals for a national team when he curled a free kick into the top corner from 25 meters for the first of his two strikes in Portugal’s 2-0 away win against Sweden in the Nations League yesterday [Macau time].
Scoring one of the best goals of his international career was a fitting way to enter the “100 Club,” where he joins former Iran striker Ali Daei, and he wheeled away in delight in an empty Friends Arena in Stockholm before performing his trademark celebration — the mid-air pirouette.
Ronaldo, who was playing in his 165th game for Portugal, then added a second goal — another curler into the top corner — and needs nine more to surpass the international record of 109 scored by Daei from 1993-2006. The five-time world player of the year already holds the record for goals in the Champions League with 131 — 16 more than nearest rival Lionel Messi — and has now scored an international goal for the 17th straight calendar year.
Portugal has won its two opening group games after beating Croatia 4-1 on Saturday, when Ronaldo was absent because of a toe infection.
Belgium and France also have maximum points. The top-ranked Belgians beat Iceland 5-1 and France defeated Croatia 4-2 — the same scoreline as the 2018 World Cup final.
England drew 0-0 at Denmark in Copenhagen.

CIRCUS WITHOUT CLOWNS
In the after-match flash interview, Cristiano Ronaldo compared empty soccer stadiums to a circus without clowns.
“It’s like going to a circus without clowns, going to a garden without flowers,” Ronaldo said. “We don’t like that as players, but I’m already used to it. I do my pre-match meditation already knowing that the stadium will be empty.”
Ronaldo said he even missed opposing fans.
“It’s sad,” the Juventus forward said. “I like when I’m jeered in away matches, it motivates me. But health has to come first and we need to respect that. But it’s sad.”
Ronaldo said he hoped that “within a few months” fans could be back because they are the “joy” of the game.
With his goals against Sweden, Ronaldo became only the second male player to reach the century mark in international soccer. He trails only former Iran striker Ali Daei, who scored 109 goals for his national team.  MDT/AP