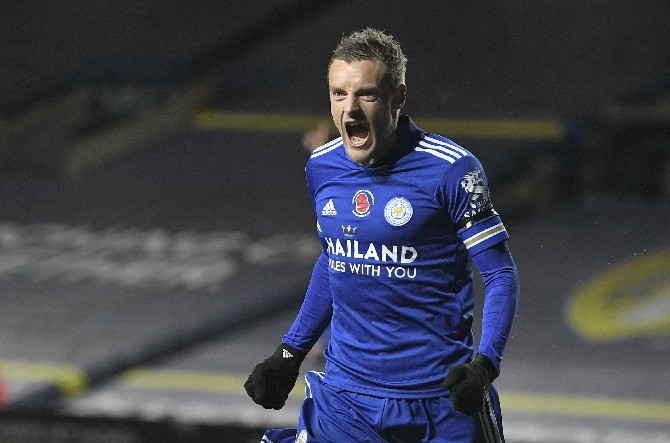 Leicester’s strong away form is helping the team make another impressive start to the English Premier League.
Add a 4-1 win at Leeds yesterday [Macau time] to previous victories on the road against Manchester City, Arsenal and West Bromwich Albion this season.
Jamie Vardy helped to create first-half goals for Harvey Barnes and Youri Tielemans before scoring himself in the 76th minute at Elland Road as Leicester climbed to second place — a point behind Liverpool — at the end of the seventh round. Tielemans added a penalty in injury time.
Leicester lost just two of its first 17 games last season and was the closest challenger to eventual champion Liverpool by the midway point, before falling away badly and ultimately missing out on a Champions League qualification place.
Few expected Brendan Rodgers’ side to make a similar fast start this time, especially with injuries depriving them of key players such as Ricardo Pereira, Wilfred Ndidi, Çağlar Söyüncü and, most recently, in-form new signing Thomas Castagne.
In Vardy, though, Leicester has a sniffer of goals who, at 33, isn’t slowing up at all.
The former England striker, who was the league top scorer last season, is up to seven already and has netted in each of Leicester’s four away wins.
And it was Vardy who helped set Leicester on its way with the first goal against Leeds, pouncing on a loose back-pass from Robin Koch and squaring the ball for Barnes to slot into an open goal after just 121 seconds.
Great movement from Vardy saw him create space to get in a header in the 21st minute that was saved by Leeds goalkeeper Illan Meslier onto his own forehead, with Tielemans converting the rebound.
Stuart Dallas equalized for Leeds early in the second half with a cross that evaded everyone and crept into the far corner, but Vardy ensured Leicester would be leaving with all three points by finishing off a length-of-the-field team move involving substitutes James Maddison and Cengiz Ünder.
Vardy had just left the field after being substituted when Maddison was fouled in the area, allowing Tielemans to take over spot kicks from Vardy and convert into the top corner.
In the other game, Fulham collected its first win of the campaign by beating fellow promoted side West Brom 2-0 to climb out of the bottom three. STEVE DOUGLAS, AP