Forum | Chui given ‘Key to the City’ in Porto visit 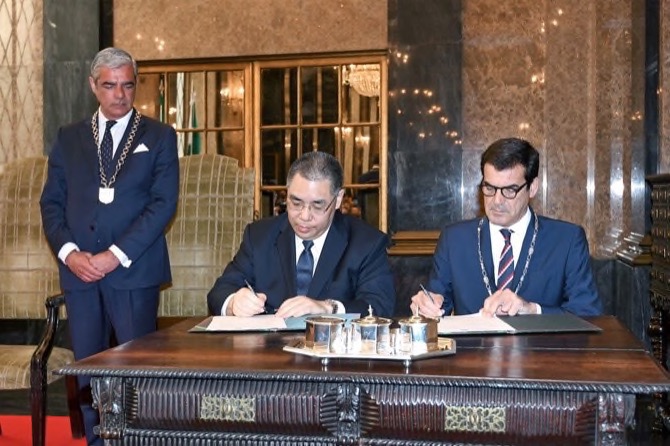 Mayor of Porto Rui Moreira (right) and Chui Sai On

Chief Executive Chui Sai On and the Mayor of Porto, Rui Moreira, signed a memorandum of understanding on Friday with the aim of promoting friendly relations between the two cities, specifically in the areas of trade and finance.

Chui, accompanied by a delegation from the Macau government, travelled from Portugal’s capital Lisbon to Porto as part of his visit. In addition to the signing of the memorandum of understand, the Mayor of Porto presented Chui with a symbolic “Key to the City”.

Speaking during Friday’s ceremony, Chui expressed his appreciation for the honor of being granted a Key to the City. He said it symbolized not only a privilege granted to him personally, but also a gesture of esteem directed at Macau as a whole.

The granting of the ‘Key’ would symbolically open the door to bolstering friendly contacts between the two sides, he said, and for the expansion of exchange and cooperation in various fields. These fields include trade, tourism, traditional Chinese medicine, and cultural heritage preservation.

Such ties would consolidate the foundation of cooperation and friendship between the two cities, the Macau Chief Executive added.

Noting that 2019 marked the 22nd anniversary of town twinning between Porto and Macau, the Porto Mayor stated that the signing of a memorandum of understanding illustrated a strong commitment to promoting exchange and cooperation.

Moreira further stated that Porto would help Macau in its effort to develop as a commercial and trade cooperation service platform between China and Portuguese-speaking countries, in order to promote internationally Porto’s financial services and tourism industry.

Later, on Friday afternoon, the MSAR government delegation visited a Macau-based company’s project in Porto, which covers media activities and services for start-ups. Chui said that the company was an example of Macau’s envisioned role within the Belt and Road initiative framework.

The Chief Executive and the rest of the delegation start their journey home on Saturday. DB