How four AP reporters got the story ‘Seafood from Slaves’ 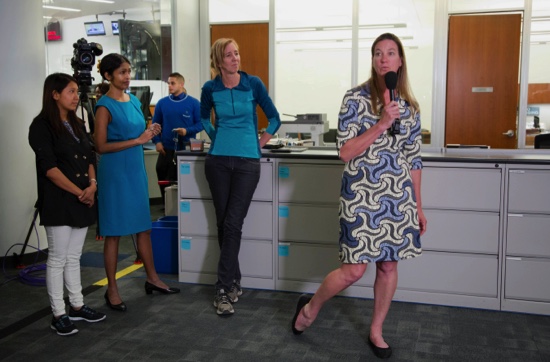 The Associated Press expose on slavery in Southeast Asia’s fishing industry, awarded the Pulitzer Prize for public service Monday [US time], was born of a painstaking investigation by four reporters who documented the harsh treatment of fishermen held captive on a remote island and traced their catch to U.S. supermarkets and restaurants.
The stories, accompanied by photos and video showing caged men and a man weeping when reunited with the family he hadn’t seen in 22 years, led to the release of more than 2,000 enslaved fishermen and other laborers. It came with substantial risk to the journalists, while posing thorny questions about how to spotlight the abuse without further endangering the captives.
The series, “Seafood from Slaves,” encompassed reporting across four countries by AP journalists Margie Mason, Robin McDowell, Martha Mendoza and Esther Htusan. Building on earlier reports of forced labor in Southeast Asia’s fishing industry, they worked for more than a year to delve into the harvesting and processing of inexpensive shrimp and other seafood sold in the U.S. and elsewhere.
Gathering with staffers in the organization’s New York newsroom Monday, AP President Gary Pruitt and Executive Editor Kathleen Carroll praised the energy and hard work required to document the slavery in detail and show how it is used to supply the food on American tables.
“It was a tour de force of reporting, and I think that what really stands out about them is their determination not to stop short until they proved it in every which way,” AP International Editor John Daniszewski said.
It was the AP’s first Pulitzer for public service. After reporting through much of 2014, McDowell and Htusan traveled to the Indonesian island of Benjina, about 1,900 miles from the country’s capital. The reporters found and talked with men held in a cage and interviewed other enslaved laborers at the town’s port. Under cover of darkness, they pulled alongside a trawler to film captives describing their plight, before the reporters’ boat was nearly rammed by an angry security guard’s craft.
The laborers, poor men from Myanmar, Cambodia, Laos and Thailand, described how they had been lured into captivity, locked up, beaten and forced to work. They pointed the reporters to a graveyard where more than 60 workers who had died had been buried under false names.
From Benjina, the AP team relied on satellite technology to track a cargo ship carrying the slave-caught seafood to Thailand, where they watched it offloaded and trucked to cold storage plants and factories. Through interviews, surveillance and shipping records, they tracked the processed seafood to the U.S., eventually pressing suppliers and retailers including Wal-Mart and restaurant chains like Red Lobster about the labor abuses.
The reporters and their editors knew they had an explosive story. But they wrestled with whether to publish immediately and put the captives at risk, or provide information to authorities and wait until the men were safe, while risking being scooped. They decided on the latter, despite the AP’s longtime emphasis on reporting, not making news.
Their efforts led to the rescue and freedom of hundreds of slaves on the island and aboard ships, as well as crackdowns on Thai shrimp peeling plants staffed by captive laborers as young as 15. Mason and Htusan traveled to Myanmar to see one of the freed men reunite tearfully with his family after two decades in captivity.
McDowell said the satisfaction of seeing the laborers freed was tempered by the knowledge that many more remain enslaved. But the AP team pursued its reporting in a way that could set the stage for additional reform, she said.
“I think what we intended to do from the beginning was to […] bring as much attention to the issue as possible, and that was the reason for linking it to the American dinner table,” she said. “Governments can put pressure on Thailand, human rights group can put pressure on them, labor rights organizations, but it’s not until the American companies or consumers start demanding change that you start to see change.”
The Indonesian government launched a criminal inquiry soon after AP published. The series, overseen by Mary Rajkumar, AP’s international enterprise editor, also resulted in numerous arrests and seizures of millions of dollars in goods.
The award is the second Pulitzer for Mendoza, who was part of an AP team recognized in 2000 for “The Bridge at No Gun Ri,” about the mass killings of South Korean civilians by U.S. troops at the start of the Korean War.
The AP has now won 52 Pulitzers, including a 2013 award for photographs of the civil war in Syria and a 2012 investigative prize for revealing the New York Police Department’s widespread spying on Muslims. Adam Geller, New York, AP