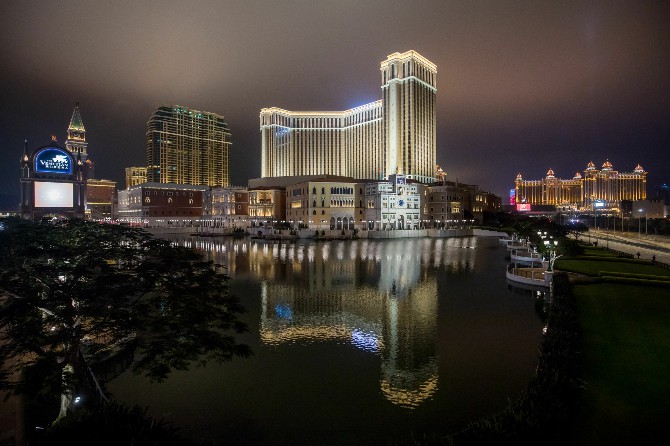 Macau casino stocks surged the most in nearly two and a half months after the gambling hub reopened to quarantine-free travel from mainland China.
Sands China Ltd. surged as much as 10%, the most since December 2018, and Galaxy Entertainment Group Ltd. rose much as 12%, its steepest gain since March 20. Shares in Wynn Macau Ltd., Melco International Development Ltd. and MGM China Holdings Ltd. each climbed about 9%. A Bloomberg gauge for the sector’s equities jumped as much as 8.5%, the most since November 10.
Macau has gradually been easing quarantine rules on visitors from China, its biggest market, with the final lifting of restrictions on Monday adding to optimism after data showed casino revenue surged last week during the Lunar New Year holidays.
“Easing quarantine policy between mainland China and Macau could provide a ground for foot traffic improvement for Macau casinos,” said Bloomberg Intelligence analyst Angela Hanlee. “We now need to watch how the mainland’s policy toward overseas gambling is in March as it does not want Macau to become an infrastructure facilitating that.”
The casinos have been recovering from their worst year on record after China began lifting travel restrictions months ago. Still, coronavirus testing and social distancing rules have kept many gamblers away, with gross gaming revenue down 64% from a year earlier in January. Information from the Statistics and Census Service (DSEC) indicated yesterday that number of visitor arrivals in January 2021 dropped by 15.6% month-to-month to 556,765, which also represented a year-on-year decline of 80.5%
In terms of source of visitors, number of mainland visitors fell by 76.7% year-on-year to 496,157, with those travelling under the Individual Visit Scheme adding up to 174,554.
All mainland cities have been removed from the SAR’s ‘risk list’ as the conditions in mainland China eased, the city’s Novel Coronavirus Response and Coordination Center recently announced.
The last administrative jurisdictions on the list were the cities of Shijiazhuang in Hebei Province and Suihua in Heilongjiang Province. They have both been removed from the list of mid-risk cities effective from midnight of February 23.
It means that from that moment, entrants from mainland China, including those originally from Macau, Hong Kong and Taiwan, will not be quarantined upon entering Macau, unless they have been to places other than the mainland and Macau in the preceding 14 days.
Prior to this, entrants who have been to these two cities in the preceding 14 days were required to undergo quarantine upon arriving in Macau, in addition to at least two weeks of self-health monitoring.
Mainland China was categorized as a low-risk area by the SAR midway 2020, when the issuance of travel permits began to be gradually introduced.
However, due to fluctuating Covid-19 conditions, certain administrative jurisdictions were put onto the mid-risk list, triggering the requirement for them to quarantine upon arrival in the MSAR. MDT/Bloomberg