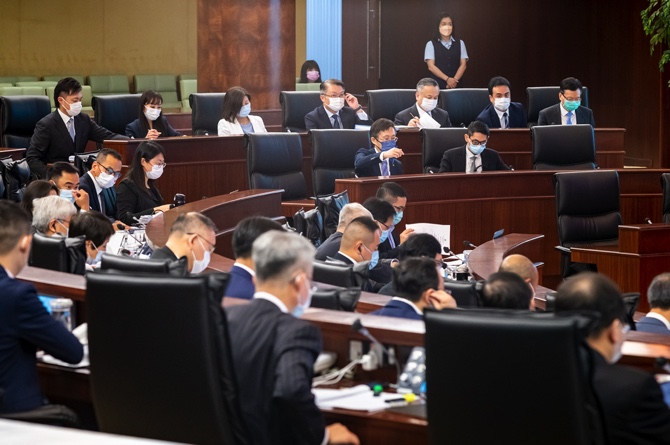 All but one proposal in the Gambling Law Amendment Bill (the Bill) were passed unanimously yesterday at the parliament, giving the government the green light to commence relicensing procedures.

The only proposal that garnered a “nay” vote, which was from lawmaker Ron Lam, is Clause 3 of Article 22 of the Bill. In his voting declaration, the lawmaker explained that the 5% funding from casino concessionaires’ gross gambling revenue (GGR) should not be considered part of the government’s tax income.

Instead, he said, the funding should be used specifically to support communal costs.

The Clause suggests that the Chief Executive be vested with the power to decrease or even waive the funding payment under the conditions of public interests, “especially exploring foreign sources of tourists.”

As of today, the city is still not open to foreign visitors.

The core reason behind his vetoing of this proposal was that he was not able to see any clear provision or requirement in the stipulation, he explained. He hoped that in the future, the supplementary Executive Regulations clarifying certain parts of this Bill will prove its effectiveness.

The government has pledged that the future regulations will ensure that the aforementioned decrease or waiver will not have any impact on communal budgeting and investments.

Secretary for Economy and Finance Lei Wai Nong, the official responsible for the review of the law, added the government would ensure that the income from the funding payment will surpass the costs related to the future decrease or waiver.

He admonished lawmakers, saying that they should view the big picture. Lei emphasized that in the past two years or so, the government had not lowered regular social welfare by a cent. In defense of the proposal, the senior official highlighted the importance of the proposal because “Macau is a world tourism and leisure center,” although the city had not seen foreign tourists in the past couple of years or so.

Lei also described the proposal as a means to “grow the pie” so that social welfare can be retained at current or even higher levels.

In addition, using previous government investments in the Social Security Fund (FSS) as an example, Lei promised that when the fund needs money, the government would handle the situation.

However, he did not offer any such contingency when the government runs out of funds. For example, competent laws stipulate that when the government does not have a sufficient fiscal surplus, it will not be allowed to invest money in the Central Provident Fund, colloquially known by elder residents as “the annual 7,000 patacas.”

In their voting declaration speech, lawmakers Lei Leong Wong, Si Ka Lon and Becky Song questioned how the government could ensure that Macau will retain its charm amid the growing intensity of competition around the world. They pointed out that many nearby countries, such as Japan and Thailand, are contemplating being open to casino operations.

In addition, Lo Choi In and Zheng Anting asked the government to help local casinos attract foreign gamblers due to the beneficial provision regarding inviting foreign clients.

The new law will also contain provisions concerning national and territorial security. In most voting declarations yesterday, lawmakers disclosed that it was the main reason why they supported the Bill.

On the other hand, allies Ella Lei, Leong Sun Iok, Lam Lon Wai and Lei Chan U made a joint declaration highlighting their appreciation for the proposals in the Bill seeking to protect labor rights.

However, they stressed that future efforts in securing labor rights are still needed as much as now, even if the proposals were passed as stipulations.

The quartet added that, along with other colleagues from parliament, the government must clarify the future details of the provisions on corporate social responsibility (CSR). “The clarified requirements should be included in the concession contracts,” Ella Lei said on behalf of the four.

Loopholes in the industry

Che Sai Wang saw the provision of allowing concessionaires to operate other businesses as a threat to local small and medium enterprises (SMEs). Meanwhile, his ally, José Pereira Coutinho, criticized the government for giving lawmakers and society in general so little time to study the Bill.

In all his speeches yesterday, Lam used the phrase “disastrous experience” several times to describe the consequences of loopholes that existed in the gambling industry over the past years.

For example, he said, although the government has assured locals of job security in future casinos by requiring certain positions to be saved for local workers and emphasizing that an upward career ladder will be in place to nurture local professionals, the lawmaker pointed out that many Macau ID holders currently holding high positions in casinos and resorts were actually immigrants from other places from the past 20 or so years.

“The talent acquisition system has run too loose to allow many of these people to obtain Macau residency,” Lam said.

In response, Secretary Lei said that Article 16 of the future law has proposals regarding CSR, which will include employee development, training and upward career movement.

Furthermore, the senior official also pledged that the government would take CSR into account while opening bids for the new licenses. The matter was subject to the concerns of at least four lawmakers, including Ella Lei, Lam, Coutinho and Che.

They found the proposal in the Bill too vague and hoped the government would make clearer proposals.

Coutinho expressed his concerns that the future stipulation would, in fact, affect the livelihoods of junket operators. In the worst-case scenario, they may eventually be forced out of operations, he suggested.

In response, the secretary, as well as Gaming Inspection and Coordination Bureau director, Adriano Marques Ho, emphasized that the proposal was made to ensure better supervision over junkets’ practices in the future.

According to them, if made into law, the proposal will benefit the “healthy development” of the city’s gambling industry.

The pair of officials were also asked about the recent closure of a couple of satellite casinos, establishments that are not located within a venue owned by any casino concessionaires. The Secretary stressed that the Labour Affairs Bureau had been working diligently to help affected employees to transfer to other positions or companies.