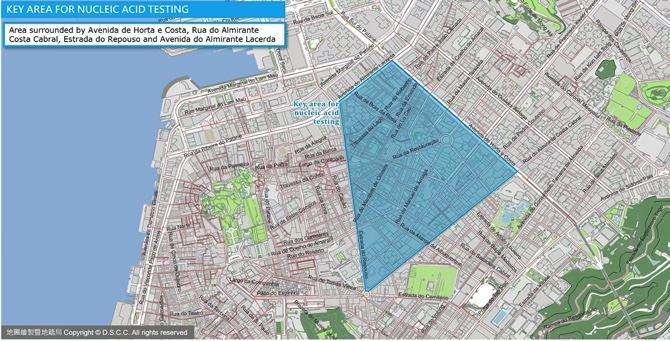 Following the announcement on Tuesday afternoon that specific categories of people would be subject to a special Covid test, details were only released by the government shortly before midnight on Tuesday, with information that many social media users found confusing.

The press release, which was originally released in Chinese, wrote: “Inspection targets in key areas include: People who live, work or have activities in the area surrounded by Avenida de Horta e Costa, Rua do Almirante Costa Cabral, Estrada Do Repouso, and Avenida do Almirante Lacerda.”

This English version was extracted from the government’s official press release, which was made available to the media at about 1 a.m. yesterday.

Commenting upon the official Facebook post from the  Novel Coronavirus Response and Coordination Centre, social media users criticized the announcement as too confusing and difficult to understand.

For example, social media users considered the wording “people who have activities in the area” to be too vague. Members of the public are greatly concerned about whether they are included as a testable group, especially those who do not live or work within the area but had visited it briefly for an errand such as collecting a purchase.

At about 1 p.m. yesterday, following much online protest about the confusion, the center issued another release clarifying that “individuals who have been at the aforementioned locations for a total period of more than one hour on or after 16 June” would be part of the key test group.

However, the clarification did not satisfy social media users. One user wondered how large the testable population would be, given such a broad definition, especially when only a limited number of nucleic acid test (NAT) stations would be available to them.

With such a large group of people gathering at a limited number of NAT stations, the user questioned whether this would pose a higher risk.

Another user considered it very easy to fall within the definition, given the size and popularity of the zone. One user questioned why all the designated NAT stations are located on the Macau Peninsula with none in Taipa or Coloane. They pointed out that a cross-district lifestyle is very common in Macau.

Furthermore, some social media users pointed out that the announcement did not provide advice in consecutive steps. In fact, the center required key groups to have negative SARS-CoV-2 rapid antigen test (RAT) results before leaving homes for the extra NAT. However, the RAT requirement was put near the end of the announcement.

Another local social media user questioned the effectiveness of the computer graphics, in which the government applied a blue filter to designate the zone to be tested.

Later, coincidentally, another social media user posted a self-made version of the map on a Facebook group. The user colored the four border streets in red and magnified the names of the four streets on the map.

In addition, nearly two and a half years into the Covid-19 pandemic, the center’s title on the Facebook page is still available only in Chinese, making it difficult for non-Chinese speakers, including Portuguese people, to search for the page.