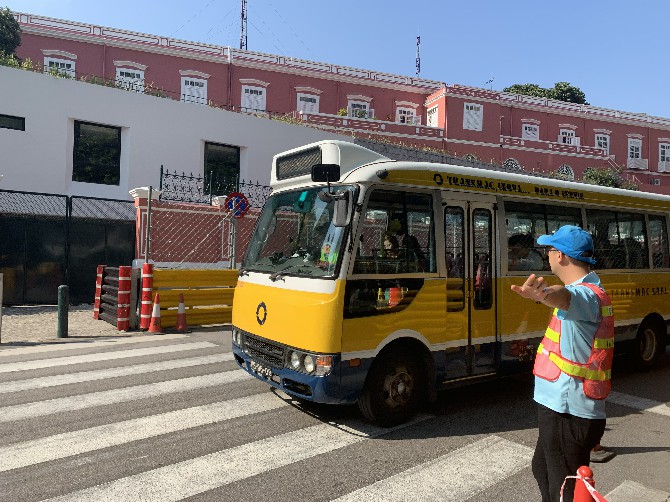 A controversial decision to slash the frequency of bus services in the Macau SAR is only for the summer, according to government authorities, who assembled a last-minute press conference yesterday to address mounting public criticism.
Lam Hin San, director of the Transport Affairs Bureau (DSAT), appeared at yesterday’s press conference to explain that the frequency of buses will be reduced by 200 shifts compared to July to around 8,300 in total. Explaining the decision, Lam cited the decrease in demand in the wake of the summer holiday and the pandemic.
According to Lam, the decision is expected to save the government 2 million patacas.
“The government will never cut livelihood expenditure,” Lam promised during yesterday’s press conference.
After netizens criticized the director for not knowing enough about bus services, Lam also said that he commutes between work and home by bus “under normal circumstances.”
He added that, usually, station heads complain to him directly about packed buses and that he will make phone contact with bus company bosses.
Last year, the average daily passenger count was 640,000. It has fallen to an average of 400,000 in the first half this year, reflecting the drop in business and general state of the economy.
To make up for the lost shifts, Lam stressed that the government will instruct the two bus service operators to run special bus shifts at another time.
There will be flexibility in the adjustment of special bus shifts, especially during the peak periods. The DSAT official illustrated his point by giving the example of the intelligent bus system measuring real-time waiting conditions. It will prompt the DSAT to send out special bus shifts responsively.
There are 49 special bus shifts operating before dusk, 39 after dusk and 20 after midnight.
Lam made an apology at the press conference for the bureau’s late response and communication failure in the process of implementing the new decision. Staff reporters