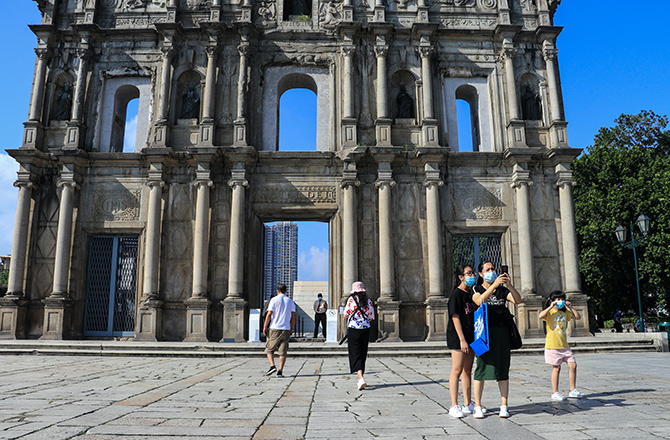 Macau’s weekly tourist traffic, including arrivals and departures, registered an increase of 7.6%, week-over-week in the period between November 16 and November 22, according to the latest figures provided by the Public Security Police Force yesterday.
The authority revealed the up-to-date statistics in a media briefing held by the Novel Coronavirus Response and Coordination Center on November 23.
The total tourist numbers from Monday to Sunday last week, November 16 to 22, totaled approximately 318,000.
A particularly significant spike was recorded on November 20, the first day of the Macau Grand Prix. The combined tally of arrivals and departures made by tourists amounted to 51,000 on that day, representing a surge of 16% from the previous day’s 43,900.
The climb in daily tourist traffic coincides with the daily arrival recently released by the Macao Government Tourism Office (MGTO).
According to the MGTO, Macau registered more than 28,000 visitors on November 20, the highest daily figure over the past nine months.
The growths in both tourist traffic and daily arrivals indicate that the annual Macau Grand Prix, which took place between November 20-22 this year, was a key drawcard to pull tourists to Macau.
The city’s tourism has been on an upward trajectory following the reinstatement of the Individual Visit Scheme (IVS) permits for all mainland tourists since September 23. The number of visitor arrivals in the third quarter this year reached 750,204, with a sharp jump of 1,409% quarter-over-quarter.
Meanwhile, the city’s total inbound and outbound traffic during the same period last week stood at 2,227,700, up 1.7% from the previous week, the police spokesperson said on yesterday’s media briefing.  Staff Reporter