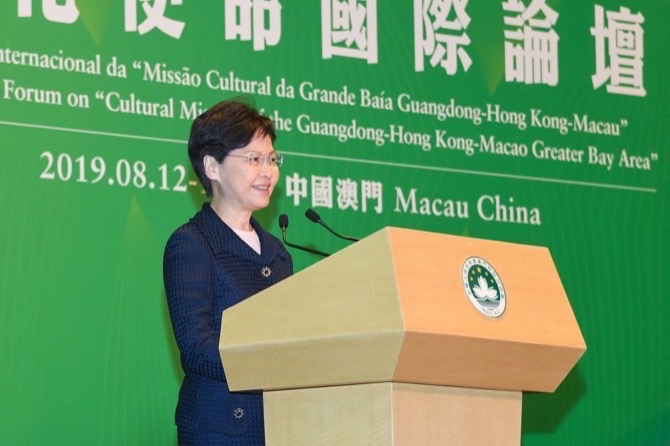 Organized by the Macau SAR government, the two- day forum invited approximately 400 people from mainland ministries and commissions, the Hong Kong government and the Macau government. “I am very pleased to be able to attend the opening ceremony of the […] forum,” said Carrie Lam, who has been accused by Hong Kong residents of avoiding the public and Hong Kong media.

“I believe that Hong Kong, Macau and Guangdong province can play a synergistic role in the development of the Greater Bay Area,” said Lam.

According to Lam, the Hong Kong government has planned to use HKD140 million to send Hong Kong artists and art groups to perform in the Greater Bay to participate in other exchange activities.

In 2009, Guangdong, Macau and Hong Kong jointly organized the Guangdong-Hong Kong-Macau Youth Cultural Exchange Programme. Ten years have passed since the establishment of the program, and a total of more than 400 Hong Kong youths participated, according to Lam.

Speaking at yesterday’s opening ceremony, Macau Chief Executive Chui Sai On said that the “urban culture of Macau is an important part of the cultural construction of the Greater Bay Area.”

He said that Macau’s unique culture – influenced by centuries of exchanges between Chinese and Western culture – played an important role in the cultural development of the Greater Bay Area. He added that Macau’s cultural background – from commerce to folk customs, religion, the role played by associations, and philanthropy – had distinctive Chinese characteristics, coupled with international influences.

The city’s unique culture had led to the Historic Centre of Macao being inscribed by the United Nations Educational, Scientific and Cultural Organization (UNESCO) in its World Heritage List. Macau’s intangible cultural heritage was also recognized at a national level, added Chui.

Xie Fuzhan, President of the Chinese Academy of Social Sciences, said in his speech that Macau should take the Greater Bay as an opportunity to take up a new cultural mission, which is to continue upholding Chinese culture as the mainstream and give full play to the advantages of multiculturalism.

Unlike other Greater Bay forums, yesterday’s forum was considered very important due to the presence of many high-ranking politicians from the SARs and Guangdong.

During the ceremony, performances featuring Greater Bay artists and patriotic displays were prepared to kick off the event.