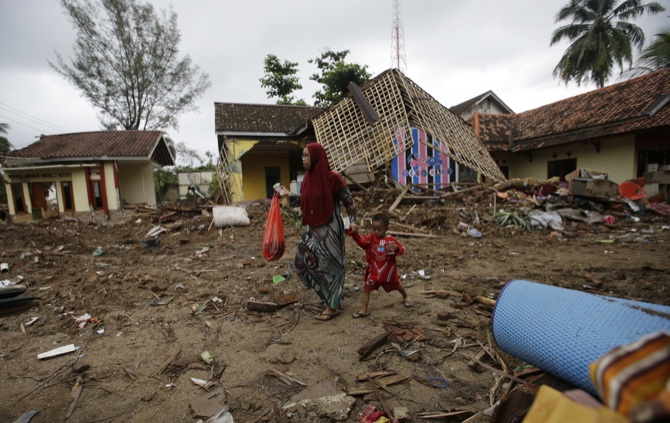 Indonesian migrant groups and Caritas Macau have been holding a series of fundraising events to raise funds for the survivors of the recent tsunami that struck parts of western Indonesia last week.
At least 430 people were killed on Saturday when the tsunami, which was sparked by landslides from an erupting volcano, hit Sunda Strait. Some 1,500 people were injured and about 22,000 residents had to relocate from their homes in villages.
This led non-government organization Caritas Macau to set up an appeal to the public on December 24 to raise funds for these victims.
The organization allocated MOP200,000 for relief efforts, and is also allocating additional funds through its charity sales.
Speaking to the Times, secretary-general of Caritas Macau Paul Pun said that the fundraising activities would be ongoing for three months.
“We are holding a three-month fundraising process. Tomorrow, we will hold a fundraising activity in Brito School. If possible, in this three months, we will plan a visit to the [affected] areas but not soon,” said Pun.
“Hopefully we’ll be able to show that local people care for the survivors. It’s still the Christmas season [so] I hope we do not forget those in areas who are suffering from natural disasters,” he added.
Although Pun admitted that the organization is not expecting a significant amount of funds that will be raised, the official hoped that residents would be aware of the organization’s efforts in raising resources for the victims of the tsunami.
Pun said that there have also been calls on its hotline from people willing to give their assistance to fundraising efforts.
Meanwhile, the Indonesian Migrant Workers Union is holding a fundraising event on Sunday at Three Lamps Square, hoping to raise awareness for the victims.
According to Yosa Wariyanti, chairperson of the association, the association also held small gatherings at the square to raise funds for the victims of the previous natural disasters that occurred in Indonesia.
“It is a bit of assistance to help relieve the burden of the victims. It would be used to purchase their basic needs including food, medicine and other necessities,” said Wariyanti. LV