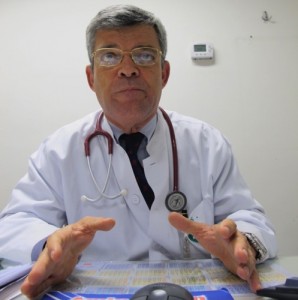 The president of the Association of Macau Portuguese Speaking Physicians says that the one-year timeframe given to the Health Bureau (SSM) director to improve the healthcare system in Macau is useless. According to Rui Furtado, Lei Chin Ion should be replaced immediately.
The physician was commenting on the new Secretary for Social Affairs and Culture’s visit to the Conde de São Januário Central Hospital (CHCSJ). During his visit, Alexis Tam admitted that Macau’s healthcare system is falling behind the international standard. In response to the complaints and opinions of medical staff, he said that the SSM should develop a mature healthcare system and resolve problems related to the training and promotion of medical personnel within one year. Tam told the media that “80 to 90 percent of the problems and opinions heard from doctors and nurses can be attributed to poor hospital management”, something that the secretary said “can be corrected.”
But Rui Furtado says that Lei Chin Ion should be replaced now instead of being allowed an extra year to prove himself. “The diagnosis of an inefficient management made by [Alexis Tam] is totally correct. That is mainly due to a lack of planning in the health services and bad management of medical internships and post-graduate training, that was inexistent,” Rui Furtado told Radio Macau, adding that he is an apologist for “Anglo-Saxon management methods,” that he considers more meritocratic.
“An extra year given to someone who has been managing the services for so many years means that we may well lose one more year. I think that one of the biggest problems in the health sector is that some people remain in their places for what seems like an endless amount time. Dr Lei Chin Ion has in the same place for been many years and another management post could be given to him. Maybe it would have been a good idea to give to rebrand health management with a new face. With his knowledge of the health sector, Alexis Tam brought someone that is fully prepared to deal with health management issues, namely Dr Kuok [Cheong], who heads the radiology service at the hospital. He is a suitable person for the post,” Rui Furtado added.
During Monday’s visit, Alexis Tam revealed that the SSM intends to hire 529 medical personnel in the upcoming year. Around 73 percent will be doctors, nurses and pharmacists. Rui Furtado expresses serious doubts about the feasibility of that target, arguing that it is virtually impossible to hire so many staff.
“I don’t know where he will hire 500.  Hiring 50 is like finding a needle in a haystack. A proper management of medical internships should have been made during the last decade, as proposed. If that had been done, the hospital would have its own specialists now. (…). There are not enough doctors now and I’m convinced that the lack of specialist doctors happens everywhere and it’s always difficult to bring those doctors because they are not beginning their careers, have families and face obstacles to leave the places where they are living,” he told Radio Macau.