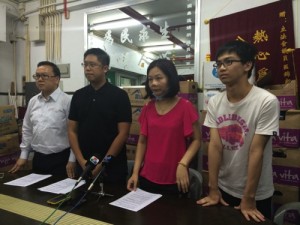 The Health Bureau has urged the family of teenager suffering from chronic pain to share a medical report with Macau’s public hospital which was issued by Queen Mary Hospital in Hong Kong.  This report confirms that Chan Pou U’s chronic pain was caused by a tailbone injury. The youngster has been living in severe pain for four years, after he was pushed to the ground by a fellow student.
The group, Macau Conscience, helped expose the case in June, revealing that the 17-year-old boy had fractured his coccyx and treatment at Macau’s public hospital had failed to improve his condition. Chan Pou U’s family claimed that he was forced to quit school, due to being unable to sit down without being in excruciating pain.
Macau Conscience also helped the family launch a fundraising campaign, aiming to enable Chan to be seen by Hong Kong physicians. Jason Chao, member of Macau Conscience, said that MOP90,000 had been raised so far.
In July, TDM News reported that the teenager was examined at Hong Kong’s Queen Mary Hospital, and results showed that his chronic pain was caused by a tailbone injury. His family revealed in a press conference held on Friday that the hospital suggested a nerve block injection, followed by tailbone removal surgery provided there is no more pain.
Chan Pou U’s family has claimed that both Conde São Januário hospital (CHCSJ) and the Youth and Education Affairs Bureau (DSEJ) have failed to adequately handle the case.
The head of the Health Bureau Mr Lei Chin Ion, has urged the teen’s family to share with Conde São Januário’s medical team the report issued by Queen Mary Hospital. If this is not done, the family will not be allowed to act upon his case.
Questioned by reports last weekend, Lei Chin Ion recalled that, if CHCSJ is to be provided with a copy of the medical report, an assistant physician could conduct an in-depth assessment of Chan’s case, referring it to the Board of Overseas Health Care for consideration, if confirmed that medical treatment outside Macau is necessary.
Any treatment shall be based only on the judgment of a professional physician, the Health Bureau stressed in a statement, adding that the case cannot be judged “by what has been reported by the media.”
Macau’s public hospital cannot ask Queen Mary Hospital for the medical report and information without the patient’s authorization, they stressed. The assessment of the case by the Board of Overseas Health Care in Macau would determine whether or not Chan Pou U’s case qualifies for financial aid to undergo treatment outside Macau.
However, Chan’s mother continues to claim that the Health Bureau has never shown concern over her son’s case.
“The government hasn’t been concerned about his case. They never visited us, and never asked us about it. We will definitely urge DSEJ and the Health Bureau to take responsibility, and to refer my son to undergo medical treatment overseas,” said his mother, quoted by TDM News.
On the other hand, the Health Bureau argues that since the beginning CHCSJ team “has paid close attention to Chan Pou U’s health and has never given up on providing him with the necessary medical treatment.”
When Chan fell on the floor after an argument with a fellow student back in 2010, he did not feel that his injury was too serious. At first, the pain was not severe. However, the level of pain evolved to the point where he was no longer able to sit down.
X-rays performed at Macau’s public hospital showed that he had fractured his coccyx, but the family claims he was only given painkillers.
His mother also claimed that they had been pressured by the school to hand in a “recovery certificate,” which would allow them to conclude an insurance claiming process. The parents complied and handed in a recovery certificate signed by two Chinese doctors who did not practice Western medicine. While Chan Pou U was apparently far from cured, the insurance policy did not reimburse the family for other medical treatment or appointments.
The Health Bureau insisted at the time that they had expressed a willingness to treat the patient, but both the teenager and his family “were not always cooperative.” CP