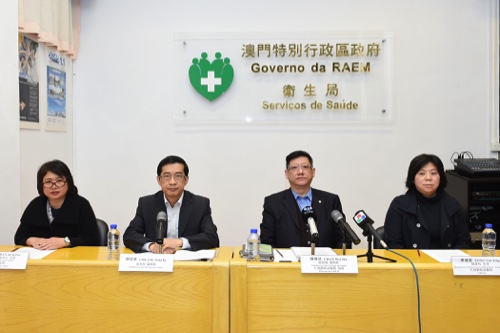 The SSM held a press conference on Tuesday evening, following the criticism made by a civic group under the Macau Federation of Trade Unions

Following complaints that the prenatal screening test for Down’s syndrome is no longer offered to expectant mothers at local health centers, the Health Bureau (SSM) has promised that all pregnant women will be provided with the tests.
According to the maternal healthcare handbook issued by the bureau, a free test to check the thickness of the fetus’ nuchal translucency will be offered to local pregnant women between 10 and 14 weeks of gestation. It will be combined with a blood test that checks the AFP and hCG levels between 15 and 20 weeks of pregnancy.
“Either test promises accuracy at 70 percent for a Down’s syndrome diagnosis, and, when undertaken together, can increase the diagnostic accuracy up to 86 percent. These two tests will be made available for pregnant women below the age of 35.  For mothers above the age, we launched a DNA test service this year as an alternative that has higher accuracy,” clarified Chan Wai Sin, the SSM deputy director and Conde de São Januário Central Hospital (CHCSJ) director.
The SSM held a press conference on Tuesday evening, following the criticism made by a civic group under the Macau Federation of Trade Unions (FOAM). They claimed that a turnover of medical personnel in the city’s public hospitals and health centers has hindered the timely delivery of nuchal translucency tests.
“We’ve received several complaints that starting from January 1, doctors at the health centers told expectant mothers that they will not provide pregnant women the opportunity to take the fetus’ nuchal translucency test because they couldn’t arrange it for some reason,” revealed Mr Lam U Tou, vice chairman of the Choi In Tong Sam Association, during the group’s press conference Tuesday morning.
“The need for technical accuracy in this test is relatively high, as outcomes can be affected by a millimeter. We learnt that the CHCSJ has lost three senior doctors in its obstetrics department recently, so the manpower shortage has led to a tight scheduling of the diagnostic screenings,” he added, “although the SSM responded by saying that the gap in manpower has been filled, it triggered more doubts in the community.”
Mr Lam further argued that the authorities seemed to imply that the nuchal translucency test is unnecessary. “If this test is not provided on schedule, the mothers will face a higher risk of carrying a baby with Down’s syndrome,” he stressed, “the SSM should confirm that the efficacy of prenatal screening won’t decline due to manpower shortage.”
It is estimated by the SSM that there will be about 2,000 pregnant women in need of a prenatal checkup, including local residents and the floating population. Mr Chan has stated that the Bureau has enough manpower to cope with the demand.
In recent years, Macau has seen a baby boom starting from the Year of Dragon (2012). Meanwhile, some experienced mothers have complained over a decline in the quality of both prenatal checks and pediatric services.. “The government should make a plan to be deployed in advance to meet surging demand and be ready to ensure that services to local mothers will not worsen,” urged the group.
Asked whether local mothers will be prioritized in arranging the prenatal checkups, Mr Chan assured that “the public medical institutions shouldn’t select the pregnant women [based on their residency] and will treat them equally in conducting prenatal screening,” adding that the checkups for local mothers are free of charge. BY