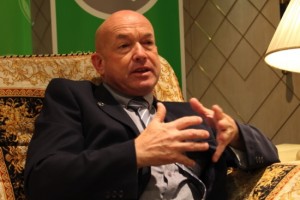 The key way for casino workers to stay healthy is through a combination of daily exercise and balanced diet, advised Dr. Jonathan Yarom, M.D., a prominent expert in sports medicine from Israel. The physician, who attended a session of the “Herbalife Asian Tour Seminar” in Macau last week, also proposed that the SAR government introduce more free sporting facilities for the general public in a bid to encourage exercise.
The former member of the Israel National Olympic committee advised gaming employees working on different shifts to stay away from consuming a carbohydrate-heavy diet, which if eaten in excess, will lead to the accumulation of fat. Instead, undertaking physical exercise every day and focusing on a diet of vegetables and proteins will provide them with sufficient strength to cope with fatigue and strenuous shifts at work.
“It’s more important for them than for anyone else to regulate their health through physical activity. So they should exercise almost everyday,” said the sports physician. “The exercise will rebuild the classical rhythm of their bodies, which they then have to supplement by eating at regular intervals.”
He continued: “If you eat protein, you won’t feel hungry. For a longer period, your body can use it for exercise to build better muscles and better resistance to fatigue.”
The medical pundit gave several pieces of advice on how to further encourage exercise in the city. He noted that making public sports facilities financially accessible to citizens was the easiest way to realize this goal. “If the government puts up bicycle lanes, bicycle training areas, running paths or outdoor or indoor gyms [throughout the city] and facilitates the use of them, then people will use them,” said Dr. Yarom. “If you have to go and pay an extraordinary sum of money to belong to a health club, you would think twice about it.”
He also proposed educating children at schools as early as possible on the importance of exercising which could pave the way for continuous engagement in sports activities when they grow up.
Asked about possible measures to prevent injuries while doing exercise, the sports physician suggested that people undertake a moderate training regime, so that sports enthusiasts avoid exercising “too much” or “too fast” in pursuit of their goals. “We say the safest way is to increase no more than 10 percent in each training session. 10 percent in time, 10 percent in length,” he explained. “The principle of training is always loading and recovering. Loading is putting a little bit more effort in that the previous day. Recovering is letting your body adjust, repair muscles and build flexibility, which will allow you to perform a little bit better.” Staff reporter