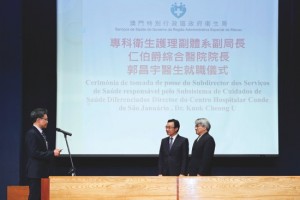 Alexis Tam (center), administrates the swearing-in ceremony for the deputy director of the Health Bureau and director of Hospital Conde S. Januário, Kuok Cheong U

The former emergency medical building of the Hospital Conde S. Januário will soon undergo renovations to ease the growing strain on the capacity of the public hospital, revealed the Secretary for Social Affairs and Culture, Alexis Tam, along with Kuok Cheong U, the new director of the hospital who just assumed office yesterday morning.
During a visit to the hospital after Kuok’s official appointment, Alexis Tam acknowledged the need to revamp the interior of the building to meet the surging volume of patients with which the hospital needs to cope every day. The health authorities informed the media a final blueprint would be available “very soon.”
“Currently there are a couple of schemes; we are looking into them temporarily,” explained the hospital director. “We would [be looking to] execute our works after coming to a consensus in a very short span of time.”
According to the two government officials, the project is expected to be completed by the beginning of next year.