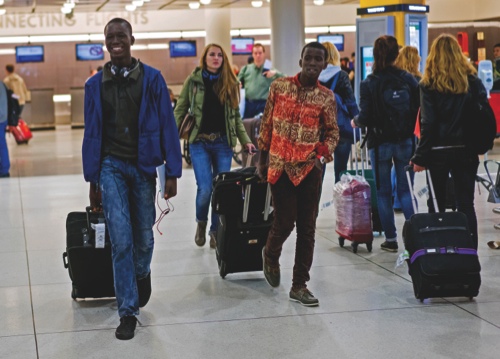 Thomas Nellon, left, 17, and his brother Johnson Nellon, 14, of Liberia, smile at their mother in the arrivals area at John F. Kennedy International Airport in New York

U.S. customs and health officials began taking the temperatures of passengers arriving at New York’s Kennedy International Airport from three West African countries on Saturday in a stepped-up screening effort meant to prevent the spread of the Ebola virus.
Federal health officials said the entry screenings, which will expand to four additional U.S. airports in the next week, add another layer of protection to halt the spread of a disease that has killed more than 4,000 people.
“Already 100 percent of the travelers leaving the three infected countries are being screened on exit. Sometimes multiple times temperatures are checked along that process,” Dr. Martin Cetron, director of the Division of Global Migration and Quarantine for the federal Centers of Disease Control and Prevention, said at a briefing at Kennedy. Cetron added, “No matter how many procedures are put into place, we can’t get the risk to zero.”
The screening will be expanded over the next week to four other airports: New Jersey’s Newark Liberty, Washington Dulles, Chicago O’Hare and Hartsfield-Jackson in Atlanta.
Customs officials say about 150 people travel daily from or through Liberia, Sierra Leone or Guinea to the United States, and nearly 95 percent of them land first at one of the five airports.
There are no direct flights to the U.S. from the three countries, but Homeland Security officials said last week they can track passengers back to where their trips began, even if they make several stops. Airlines from Morocco, France and Belgium are still flying in and out of West Africa.
Public health workers use no-touch thermometers to take the temperatures of the travelers from the three Ebola-ravaged countries; those who have a fever will be interviewed to determine whether they may have had contact with someone infected with Ebola. There are quarantine areas at each of the five airports that can be used if necessary.
President Barack Obama said last week that the new screening measures are “really just belt and suspenders” to support protections already in place. Border Patrol agents already look for people who are obviously ill, as do flight crews.
Health officials expect false alarms from travelers who have fever from other illnesses. Ebola isn’t contagious until symptoms begin, and it spreads through direct contact with the bodily fluids of patients.
Cetron said more than 36,000 travelers leaving West Africa have been screened for Ebola in the last two months and none was infected with Ebola.
The extra screening at U.S. airports probably wouldn’t have identified Thomas Eric Duncan when he arrived from Liberia last month because he had no symptoms while traveling. Duncan, the first person to be diagnosed with Ebola in the U.S., died Wednesday in Dallas.
The ashes from the Dallas apartment where Duncan first became ill will be taken to a Louisiana hazardous waste landfill for burial.
The linen, bedding and carpet taken from the apartment Duncan got sick were taken to the Veolia Environmental Services incinerator in Port Arthur, Texas, where they were destroyed Friday.
Company spokesman Dan Duncan told the Beaumont Enterprise newspaper that the ash will be analyzed for two days for any remaining contamination before it is sent to the Louisiana landfill.
State officials say Duncan’s body was cremated but aren’t giving further details.
Experts say the federal government has broad authority to screen passengers and quarantine them if necessary.
In other developments, officials in the state of New Jersey issued a mandatory quarantine order for members of an NBC television crew that was exposed to a cameraman with Ebola in Liberia.
The order went into effect Friday night after state health officials said a voluntary 21-day isolation agreement was violated.
Officials with the state Health Department told The Associated Press that the crew remains symptom-free and there is no reason for concern of exposure to the deadly virus to the community.
Citing privacy concerns, department officials wouldn’t give further details, including who violated the voluntary agreement and how the state learned of the violation.
The NBC crew included medical correspondent Dr. Nancy Snyderman, who lives in New Jersey. She was working with Ashoka Mukpo, a cameraman who was infected in West Africa. He is being treated at a hospital in Omaha, Nebraska.
An NBC representative told The AP on Saturday that the network could not comment on any individual case, but noted that the team was deemed to be low-risk upon its return from Liberia and its members agreed to follow guidelines set by local health authorities.
“We fully support those guidelines and continue to expect that they be followed,” the representative said. “Our team are all well with normal temperatures, which they check multiple times a day, and they are also in daily contact with local health officials.”
In a phone interview with “Today” last week, Snyderman said all the gear she and her crew used was being disinfected because they all shared work space and vehicles. She said she believed she and her team were at a low risk because they have been “hyper-vigilant.”
The Centers for Disease Control and Prevention says that people exposed to the virus develop symptoms two to 21 days after their exposure. By Karen Matthews, New York AP

A health care worker at a Texas hospital who cared for an Ebola patient has tested positive for the virus in a preliminary test at the state public health laboratory, officials said yesterday. A statement on the Texas Department of State Health Service’s website said “confirmatory testing will be conducted by the Centers for Disease Control and Prevention in Atlanta.” Officials said the health care worker reported a low grade fever Friday night and was isolated. Preliminary test results were received late Saturday.

Spain’s government says an assistant nurse infected with the Ebola virus is showing signs of “slight improvement.” But yesterday’s statement says Teresa Romero’s prognosis remains serious and further complications cannot be ruled out. Another Spanish nurse who had also treated a patient infected with the virus in Africa was released from the hospital Saturday after twice testing negative for Ebola. That patient, Manuel Garcia Viejo, died of Ebola on Sept. 25. He had been medical director of a Sierra Leone hospital for 12 years.