Health | Teenagers ’ lack of fitness calls for a change in policies 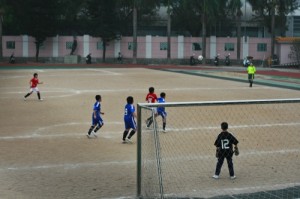 Authorities plan to formulate policies that will encourage Macau’s youngsters to exercise more, as they have seen a trend of physical deterioration among local adolescents.
“Compared to other provinces and cities in the country, our adolescents’ overall physical condition is at quite a low level. We noticed that our adolescents’ physical fitness has deteriorated. But the deterioration is also a global trend, [and] many advanced countries like Japan also face this issue,” said the Sports Development Board (ID) president José Tavares.
To counter this trend, the president said that “a lot of work has been done throughout these years” and the government’s follow-up group will “continue working in the direction of providing more platforms for youngsters to participate in execise.”
Since 2005, Macau has joined the national resident physique monitoring program that takes place every five years. Preschool children, students, adults and elderly persons ranging from 3 to 69 years old will be assessed in respective examinations pertaining to their body shape, physical functions and fitness.
A new round of physical fitness tests started yesterday at the Olympic Sports Center Stadium, where a total of nearly 9,800 residents will be assessed over the next three months.
“We will compare the new data with previous results to see the trends of different age groups’ physical fitness changes. In accordance with that, we expect to make some changes in our policies or measures in order to improve residents’ physical conditioning,” said Tavares.
Previous monitoring results showed that, amongst 32 provinces and cities monitored in the program, Macau’s preschool children in all age groups ranked significantly behind the others. Whilst adolescents’ fitness levels ranked low in the nation, young adults’ fitness conditions are also worrying.
In 2010, only 44 to 58 percent of 3 to 6 year-old Macau boys passed the physical fitness test, whereas the passing rate in most territories – including Beijing and Guangdong – was as high as 90 percent. The passing rates for Macau’s preschool girls also stood at a low level, ranging from 46 to 69 percent in different age groups.
Moreover, a deterioration of physical fitness was found among Macau’s adolescents in all age groups from 7 to 19 year-olds, except that of 12 year-olds.
Most student age groups also recorded a decline in physical functions except the age groups of 12, 14 and 17 year-olds. As for body shape, boys at the ages of 16, 19 and 8 regressed the most in the assessment.
“The government needs to think of policies as how to encourage the youngsters to do more sports and execise,” said Tavares, adding that children nowadays tend to stay at home staring at the television or computer screen rather than going out for outdoor activitives.”
“The Education and Youth Affairs Bureau (DSEJ) enacted many policies to instruct secondary schools in this matter, such as extending the length of PE classes, and the Health Bureau also strengthened its monitoring on students’ dental care and healthcare,” he said.
“We’ve also been promoting free sports grounds to the public and adjusting our summer sports interest classes all along to make the subjucts more attractive to the youngsters so that they’ll join more,” he added.
According to Tavares, a large portion of participants in the bureau’s sports interest classes have been from the older generation.  “The physical monitoring showed a great improvement in the health and fitness conditions of Macau’s middle-aged and elderly residents. They ranked well amongst those in other territories. This age group pays more attention to their health, they’ve been very active in exercise,” he indicated.