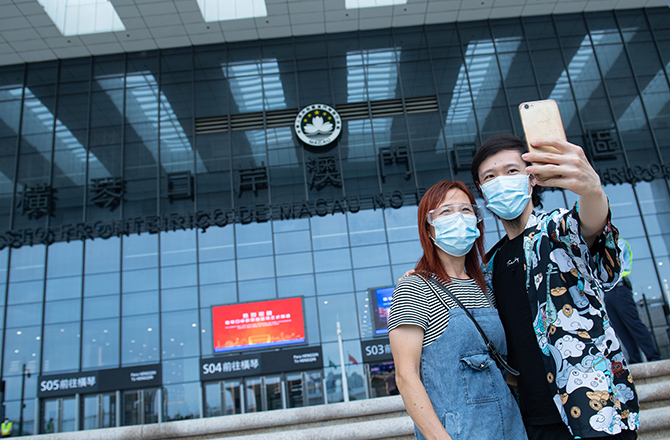 The Hengqin district of Zhuhai received nearly three times as many visitors as Macau during Golden Week this year, totaling 450,000, up 36% compared to the same period last year.
The SAR, meanwhile, received a total of 156,000 tourist arrivals during the national holiday, a plunge of 86% compared to last year’s holiday. The daily average visitor arrivals during the eight-day holiday, which coincided with the Mid-Autumn Festival, stood at 19,538, according to data released by the Macao Government Tourism Office (MGTO).
During Golden Week, the central government endorsed travel to national destinations and discouraged its citizens from traveling abroad. However, despite the endorsements, the city’s tourist arrivals still did not meet the expectations of local businesses, including gaming operators.
Hengqin fared much better than Macau in this regard. Statistics provided by the Hengqin district’s social affairs department showed that three of the city’s entertainment parks – Chimelong International Ocean Tourist Resort, Sumlodol Hengqin Camping Town, and the Lionsgate Entertainment World – hosted over 310,000 visitors during the holiday, as cited in a report by Macau Daily News.
Meanwhile, also during the holidays, the “Macau International Culture and Food Festival Hengqin Station,” which featured a total of 111 booths, attracted more than 100,000 local citizens and tourists.
During the opening ceremony of the Hengqin Port back in August, Chief Executive Ho Iat Seng said that the port would provide fresh opportunities for closer cooperation between Macau and Guangdong Province. He further said that the port could facilitate movement of people and goods between Macau and Zhuhai.
Earlier this year, the city’s top official mentioned that his government aims to expedite Macau’s development as a world centre of tourism and leisure, complementing Hengqin’s position as an island for international tourism and leisure.
One of the roles envisioned for the intensive cooperation zone in Hengqin is that Macau and Guangdong would jointly develop a greater number of tourism products to facilitate multi-destination travel.
Previously, the MGTO said that it planned to include tours that cover Hengqin in the Macao Ready Go! Local Tour campaign, if travel conditions allow. Whether the tours go ahead will depend on the city’s capacity to conduct Covid-19 nucleic acid tests. No updates have been provided since then.
According to official data, mainland visitors accounted for 93% of the total number of visitor arrivals to Macau during Golden Week, one of the city’s supposedly busiest periods.
In recent months the Macau SAR saw its tourism arrivals plunge, particularly prior to the resumption of the Individual Visit Scheme (IVS), which was only fully reinstated in September 23.
Although applications for travel endorsements to Macau in Guangdong Province were reinstated on August 12, the city did not see a significant change in its tourism arrivals.
During the weekend after the reinstatement, official figures show that there was a total of 7,500 tourist arrivals at the borders on Saturday and 6,000 on Sunday, slightly higher than the weekend prior, which stood at 11,200 across both days. Therefore, following the reissuance of IVS nationwide on September 23, businesses were hopeful for more tourist arrivals during the Golden Week after facing several months of economic downturn.
Many considered the reinstatement of the IVS to be just in time for the Golden Week, as IVS applicants would need at least seven days to have their visas processed. However, the changes in tourist arrival numbers were not as significant as expected.