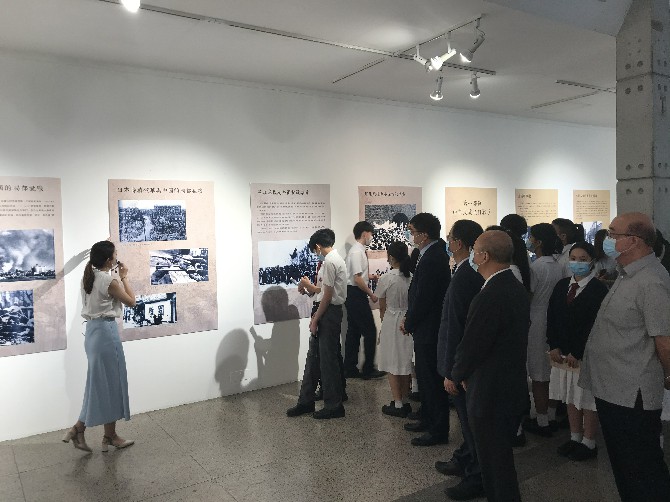 Students at yesterday’s opening of a history exhibition pledged to enhance their knowledge of the Second World War, specifically the Japanese invasion of China. The exhibition, themed “In Commemoration of the 75th Anniversary of the Victory of the Chinese People’s War of Resistance Against Japanese Aggression and the World Anti-Fascist War,” kicked off yesterday at the Tap Seac Gallery.
Organized by the Macao Foundation and the Oral History Association of Macao, the exhibition showcases approximately 70 historical pictures that show how the Chinese defeated the Japanese during the Second World War. The pictures also feature Macau people participating in the fight against Japan. This allows visitors to learn how Macau residents contributed to the victory of the Chinese people.
The organizers and their supporting organizations, including the Liaison Office, hope that the exhibition will enhance patriotic education amongst the Macau public.
Approximately 50 students from several local secondary schools, including the Yuet Wah College and the Escola Hou Kong, attended the opening ceremony where they listened to a guide explain the exhibition.
During the tour, several students shared their thoughts on the exhibition with the media.
One of the students, surnamed Ao Ieong, said that sensing the hardship of the ancestors who fought in the war and seeing pictures of the Nanjing Massacre deeply touched him. They made him compare people’s lives during the wartime and those today. The student commented that “the motherland will not be bullied only when it is strong.”
Another student, surnamed Chan, learnt about Macau’s involvement in the war, saying that he could not imagine what Macau’s situation was like at that time.
According to a student surnamed Vong from Yuet Wah College, these students applied to the school to be at the exhibition’s opening ceremony.
Speaking to the Macau Daily Times, Angel Iek, a student from Escola Hou Kong, applauded the exhibition as it supplemented her knowledge regarding this specific part of history.
“Actually, we have also learned about this part of the history in the school’s history classes. Through the exhibition and the guide’s explanation, I have new knowledge and understanding regarding this segment of history,” said Iek.
“Even though we can’t change this segment of history, we will not forget it.”
Crystal Ng, who is also a student from Escola Hou Kong, said that this exhibition was more touching than a history textbook because it has many pictures.
“Pictures make us feel the bitterness and the gallantry of fighters during this segment of history in a more direct way. I feel fortunate that we live in a happy and peaceful era, but I also feel pity that we lost such brave warriors during this time of history,” said Ng. She thanked her school for letting students take the time to visit the exhibition during school hours.
The exhibition will be open from 10 a.m. to 7 p.m. until September 9.
This year, the SAR government will open a national security education museum that aims to provide the city with a permanent patriotic exhibition.
Speaking to the Times at yesterday’s opening ceremony, William Choi, president of the Association of Culture and Art of Macau, said that “Macau still does not have enough of these kinds of exhibitions” and that he wants more of them.