HK drafts law to make Covid tests mandatory for some 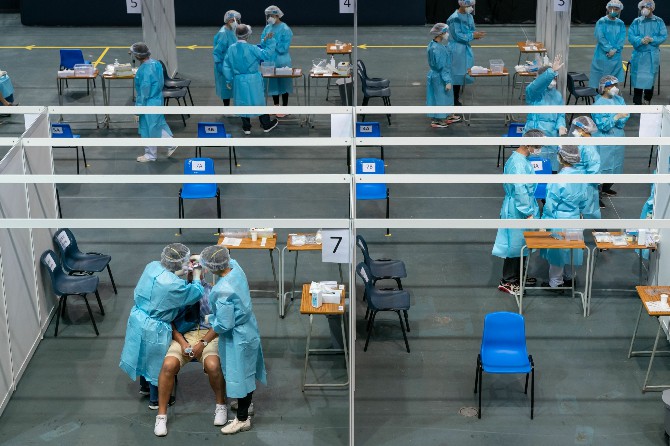 Hong Kong is drafting a law that would make Covid-19 tests mandatory for people with symptoms and other specific groups, Chief Executive Carrie Lam said, as the city continued to slowly ease virus-related restrictions.
Lam announced the plan to enact a new law mandating tests for known clusters and high risk groups at a weekly briefing, without elaborating. The government said earlier this month that it was studying the legal framework for mandatory coronavirus testing. Officials said later on Tuesday that dining at bars and restaurants would be allowed until 2 a.m. and that dancing and live events could resume.
Restaurants will also be allowed to operate at 75% capacity, up from 50%, and masks won’t be required when exercising in indoor venues. The changes go into effect on Friday.
The number of people allowed at group gatherings will remain at just four for another week, officials said.
It’s “unavoidable that there may be some sporadic cases and small clusters in the community from time to time,” said Secretary for Food and Health Sophia Chan. “The most important thing is that we have the capacity and capability to actually stabilize the situation once there are infections or outbreak.”
The moves follow a voluntary city-wide summer testing program that unearthed only a handful of positive cases. The program was bedeviled by public skepticism and suspicion that the Beijing-backed drive was a move to harvest residents’ DNA. The government denied those claims.
“We hope every citizen can voluntarily do testing to make society not affected by the epidemic,” Lam said. “But Hong Kong is a very free society and the volunteers may not appear. For the purpose of public health, we really need some specific people to get tested.”
Lam’s disapproval rating rose to 73.8% in a new Hong Kong Public Opinion Programme poll released Tuesday – the worst result since a late March-early April survey.
She is set to discuss economic policies in Beijing next week, and will meet with officials from Guangzhou and Shenzhen about the Greater Bay Area after her trip to the capital. President Xi Jinping visited the border city of Shenzhen earlier this month and urged young people from Hong Kong to move to China, part of an effort to more closely integrate the financial hub – which saw historic anti-government protests last year – with the mainland. MDT/Bloomberg