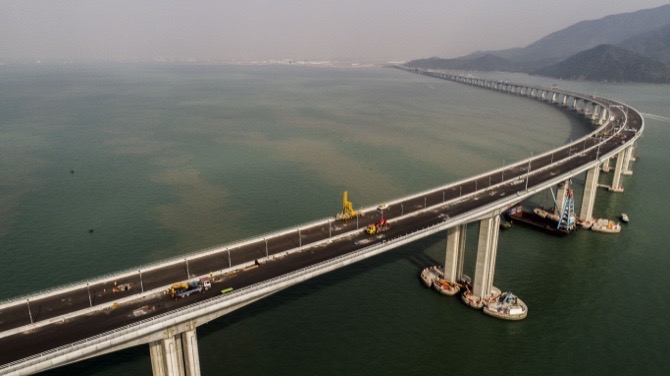 Nearly nine months after its opening in October last year, the Hong Kong-Zhuhai- Macau Bridge (HKZMB) accounted for just 7% of Macau’s cross- border vehicular trips in June, the latest month for which data is available.

The number of cross-border trips using the bridge numbered just 32,500 in June, compared with a total of 441,400 trips via all of Macau’s checkpoints.

A year-on-year comparison shows that the total number of cross-border vehicular trips grew 9.7% in June. The rise, which surpassed the growth of 7.4% via the Cotai Checkpoint (127,800) and the 0.7% decrease at the Border Gate (278,000), is attributed to the bridge’s opening last autumn.

Though it is overshadowed by the Cotai Checkpoint and Border Gate, the number of vehicles using the bridge is on the rise. In the 10 weeks between the bridge’s opening on Oct. 24 and the end of 2018, just 23,500 cross-border trips via the bridge were recorded – almost one-third less than the number of trips taken in June 2019 alone.

Last year, consultants hired by bridge authorities in the three cities forecasted that traffic on the HKZMB would reach 29,100 vehicles per day by 2030, while the daily passenger flow would amount to 126,000 trips.

The forecast would see the number of monthly trips swell to approximately 27 times the volume seen in June.

On the Macau side, the forecast fueled concerns that the city’s urban infrastructure would struggle to accommodate the increase in cross-border traffic.

Yesterday, it was also announced that the number of traffic accidents in June had declined by 24% year-on-year to 979, bringing the total for the first half of 2019 to 6,170 accidents.

As for aviation, there were 6,042 commercial flights at Macau International Airport in June, up 22% year-on-year. The rise was led by flights connecting mainland China, which rose 39.7%, while those to and from Taiwan grew 7.3%.

In the first half of 2019, cross-border vehicular traffic was up 7.5% year-on-year to 2.6 million trips. For the same time period, inbound and outbound commercial flights via Macau International Airport grew by nearly 20%.