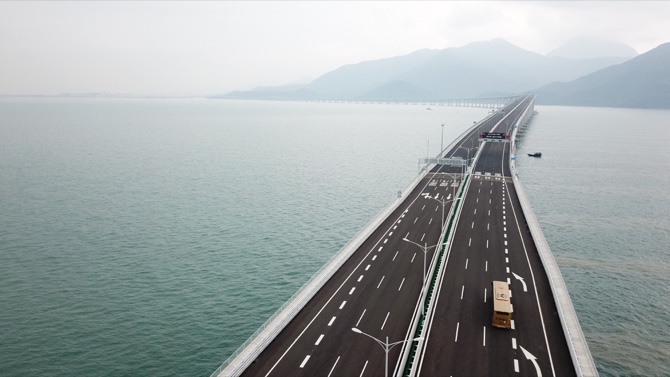 The Hong Kong-Zhuhai-Macau Bridge has recorded an average of 64,000 crossings on a daily basis during the past month, according to the Ministry of Transport of China.

As of midnight of November 20, the bridge had been crossed 1.79 million times. The highest daily utilization was recorded at 103,000 times.

The peak normally occurs on weekends, with the highest utilization on weekends seen on November 18.

The Chinese transport authority said that during the 29 days of operation, from October 24 to November 21, 97 percent of the vehicles using the bridge were coaches, 45 percent of which were shuttle buses, and approximately 30 percent were small coaches.

During the first days of operation after the bridge’s opening, dozens of trucks drove through the bridge every day. Since then, the flow of trucks has not increased considerably, with a maximum of 150 trucks using the bridge daily.

Furthermore, from October 24 to November 21 (29 days in total), the overall traffic flow amounted to 89,750 vehicles, corresponding to an average of about 3,100 vehicles per day.

Besides the unsatisfying traffic flow in the vicinity of the bridge’s terminal nodes, other issues were reported, including the Macau side’s incapability in terms of transportation arrangements.

Previously, the HKZMB shuttle bus operation had also reported losses due to a large number of mainland elderly one-day tour groups taking advantage of the discounted fare of shuttle bus rides for elderlies.

Moreover, it has been claimed that mainland China’s travel agencies have been assembling tour groups to take buses in order to visit the bridge, which has resulted in an extremely unbalanced number of passengers during different hours.

The region’s Tourism Development Committee held a meeting last week discussing Macau’s “World Centre of Tourism and Leisure” development. During the meeting, one of the committee members suggested that the Macau government should try to have local tourism buses reach Hong Kong airport directly.