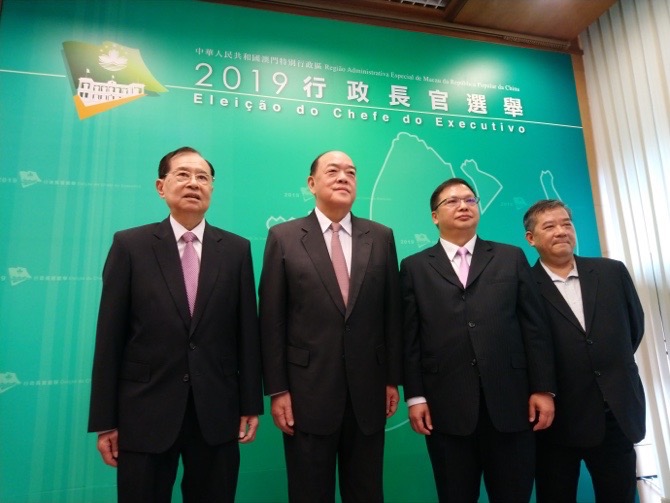 Chief Executive election candidate Ho Iat Seng told the media that he would not stop at the 66-nomination benchmark, pledging to work diligently to collect as many nominations as possible.

The candidate, who resigned from his post as president of the Legislative Assembly on Friday, obtained nomination forms at the Electoral Information Center at the Public Administration Building yesterday.

The commencement of the official nomination period began yesterday.

However, in order to be accepted as an election candidate, each contender must obtain a minimum of 66 nominations from the 400-member Chief Executive Election Committee.

Most analysts expect that only frontrunner Ho Iat Seng will obtain the necessary backing from the Committee to stand in the election.

Nevertheless, Ho said that he is going to make full use of the coming two weeks to obtain as many nominations as possible. “Stopping once I reach 66 nominations is not part of my election [plan],” said Ho.

He said he will contact each of the 400 members of the Election Committee to hear their comments and suggestions. He said the electors were eager to hear his plans and vision while he is eager to hear from them too.

When asked if he had already started discussions with electors, Ho said, “as the nomination period started today [yesterday], I have already talked on the phone with several electors.”

“All of them are supporting me,” he added.

Besides Ho, there are currently five other potential candidates.

Some of Ho’s competitors have already announced their manifestos, but Ho claims it was too early to do so, as well as illegal.

“I think announcing a manifesto at this stage is a violation of the law, because it is stated that only during the election period can we announce our manifestos,” he told reporters yesterday.

“At the current stage, we should listen to our electors regarding requests from the public. I can thus make a manifesto,” Ho added.

However, he also noted that he was aware of the existing problems facing the general public, including those related to housing, transport and general livelihood matters.

Meanwhile, also on the starting day of the Chief Executive election nomination period, Chan Weng Fu, one of the announced potential candidates, obtained his copy of the nomination form.

The 68-year-old was spotted by Chinese online media “All About Macau” at the Public Administration Building. He told the outlet that he had yet to understand as to how the electors could be contacted, but he believes that after he releases his manifesto the electors will support him. Staff Reporter