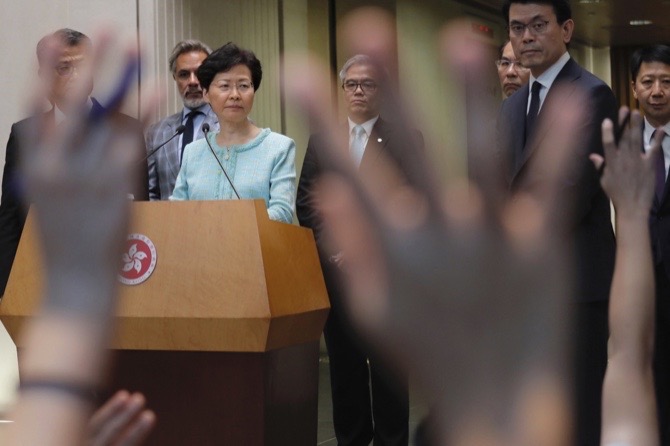 Hong Kong leader Carrie Lam said Friday her priority is to “stop the violence” rather than make political concessions as the city’s two-month-long protest movement pressed on with a three-day demonstration at the airport.

Lam said traffic disruptions and confrontations between police and protesters have hurt the economy, particularly the retail and food and beverage sectors.

A Hong Kong government statement referring to travel safety warnings issued by 22 countries and regions appeared to acknowledge the potential for the protests to devastate the territory’s crucial travel industry. It said the government and travel industry were working to minimize disruptions and “all stand ready to welcome and assist visitors to Hong Kong any time.”

The government said tourist arrivals dropped 26% at the end of last month compared to a year earlier and were continuing to fall in August. The travel industry accounts for 4.5% of the financial hub’s economy and employs about 250,000 people, or about 7% of the total working population.

The impact could be as bad or worse than occurred during the 2003 outbreak of severe acute respiratory syndrome, Travel Industry Council Chairman Jason Wong Chun-tat was quoted as saying by the South China Morning Post. Wong said cancellations could result in hotel revenues in August dropping by 40% against the same period last year.

At the same time, protesters occupied the arrival hall at the city’s international airport.

While the airport appeared to be operating normally, extra identification checks were in place for both travelers and employees, and airlines were advising passengers to arrive earlier than usual for check-in.

Carrie Lam said Friday an inquiry into police actions would not be appropriate while they are still carrying out operations in response to the demonstrations.

Hong Kong police say 592 people have been arrested since June 9, ranging in age from 13 to 76. They face charges including rioting, which allows for prison terms of up to 10 years, along with interfering with police duties and taking part in unauthorized gatherings. mdt/AP