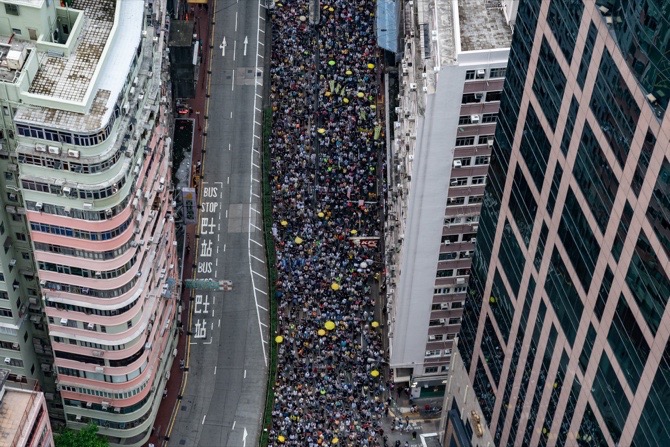 Hong Kong’s government said it would press ahead with legislation to end a ban on extraditions to mainland China, despite opponents staging one of the largest mass protests since the 2014 Occupy movement.

The government said in a statement late Sunday that the bill was necessary “to plug the loopholes” in laws governing the transfer of criminal suspects between the former British colony and other jurisdictions. Hong Kong Chief Executive Carrie Lam is seeking to pass the legislation, which would allow for one-off deals with places including mainland China, Macau and Taiwan, before the current legislative session ends in July.

“The government understands that there are different views in the community on the proposed legislative amendments,” the government said. “The government hopes that the Bills Committee can start its work as soon as possible during which we will continue to explain the legislative proposals in detail to the Legislative Council and the public and exchange views.”

The comments came after as many as 130,000 marched to the city’s Legislative Council building Sunday to protest against the legislation, with many participants calling for Lam’s resignation. Although police estimated the crowd at less than 23,000, the demonstration was among the largest since months-long pro-democracy rallies in 2014 ended without securing any concessions from the Beijing-backed government.

Lam argues the law is needed to bring fugitives to justice, citing difficulties in pursuing murder charges against a Hong Kong man over the death of his girlfriend while the pair were vacationing last year in self-ruled island of Taiwan. But the push has prompted new concern about the legal autonomy guaranteed to Hong Kong before its return to China in 1997, as well as the risk of Hong Kong citizens and foreign residents being subject to prosecution on the mainland.

Besides local activists’ fears of political persecution, foreign business groups have warned that the legislation could reduce Hong Kong’s appeal as a global financial hub. While Sunday’s march was estimated the largest since as many as 200,000 people joined the Occupy demonstrations, an annual vigil commemorating the 1989 Tiananmen Square crackdown drew an estimated 135,000 in 2015, according to that event’s organizers.

The sentencing of leaders of the Occupy protests last week to prison terms of up to 16 months might have contributed to the larger turnout Sunday. An upcoming event commemorating the 30th anniversary of the Tiananmen incident on June 4 will present another opportunity for pro-democracy forces to show their numbers.

In response to criticism, Lam has already removed nine categories of business-related crimes from the potential offenses eligible for one-time extradition decisions. The government has so far given no indication that it could scrap the proposal, like it did for a controversial national security bill after a half million protesters took the streets in 2003.

“The Taiwan murder case has clearly shown that serious crimes can happen in any place and at any time. It is just a question who the unfortunate victim may be,” the government said Sunday. “Hence, we have to plug the loopholes in the current mechanisms as quickly as possible.” Natalie Lung & Blake Schmidt, Bloomberg