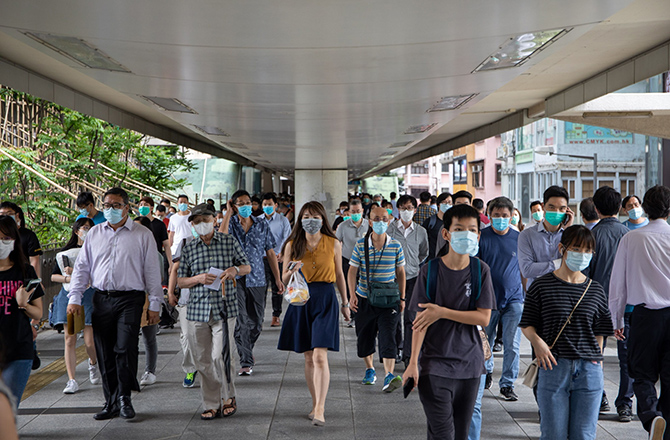 Hong Kong will extend virus-related social distancing measures for another week amid persisting signs of hidden Covid-19 transmission, Chief Executive Carrie Lam said.
Despite moderating numbers, “we still have unknown cases and it implies that there is silent transmission chain in our community,” Lam said at a weekly briefing on Tuesday before a meeting of her advisory Executive Council.
Bars, pools and theme parks were allowed to reopen last Friday. Bars were allowed to remain open until midnight, and dine-in services at restaurants were extended by two hours, also until 12 a.m. The limit on public gatherings will be kept at four people.
The restrictions are now due to expire on Oct. 1 — China’s National Day holiday — which has typically seen pro-democracy protests in Hong Kong. Activists have worried that the government is using Covid-19 related social measures to hinder their ability to hold demonstrations.
Visitors play at a game stall at Ocean Park during the theme park’s reopening in Hong Kong on Sept. 18.
Hong Kong has largely contained its latest wave of the coronavirus, reporting just two new local cases on Monday, with four imported. But Lam cautioned the city must remain on guard with school campuses starting to reopen, and urged businesses to exercise self discipline.
Separately, Lam reiterated her defense of the law on Tuesday, saying Hong Kong’s legal system remained intact, after a foreign judge sitting on the city’s top court resigned, citing concerns about the controversial national security legislation.
“We have gone all out to explain to the international community as well as our interlocutors in various places that that the legal system is as robust as ever under the national security law, that judicial independence is not undermined in any way, that Hong Kong now restores law and order which makes it an even more attractive place for doing business,” she said. Karen Leigh & Felix Tam, Bloomberg