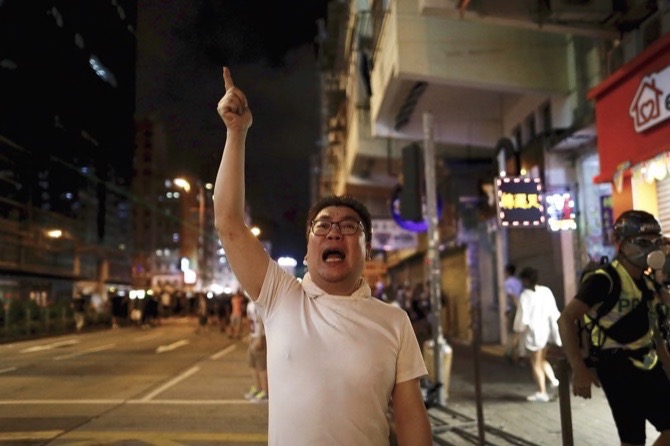 Hong Kong’s hotel industry is struggling with a collapse in bookings after thousands of protesters shut down flights from the territory’s airport this week in an escalation of months of clashes with police.

Revenue from room sales is set to plunge as much as 50% this month, according to Yiu Si-wing, a Hong Kong lawmaker representing the tourism industry who said visits from mainland China that usually account for 80% of arrivals are down most as people fear for their safety.

The slump will deal a further blow to an economy that’s already contracting after months of unrest, as well as fallout from the U.S.-China trade dispute. Yiu said hotel occupancy rates that averaged 90% in the first half will fall by a third or more and that arrivals from the mainland to Hong Kong – a key shopping destination for Chinese – could slow to a trickle.

“The impact on tourism is huge,” Yiu said in an interview, estimating that half of mainland visitors due in August are likely to cancel or defer their plans. Yiu cited factors such as a reported attack by protesters on a man suspected of being a security agent from the nearby city of Shenzhen. The incident was the top-trending topic on Chinese social media platform Weibo on Wednesday.

Mainland Chinese planning trips to Hong Kong expressed concern about the risks of traveling through the airport. Chinese officials and the state-run media are framing the protests as driven by violent extremists, highlighting instances in their coverage where protesters have allegedly attacked the police or civilians not involved in the demonstrations.

Grace Huang, a 20-year-old Wuhan University student, said she was reconsidering a one-day layover in the territory on her return from a visit to Canada. “I fear I’m going to be beaten,” she told Bloomberg by telephone.

Beijing resident Jasmine Ji, 23, said she will delay a trip to Hong Kong to complete an application for permanent residency in a city where she previously graduated from university.

“I feel like my personal safety could be severely threatened if they find out I speak Mandarin or am a Chinese citizen,” she said. “I won’t fly to Hong Kong airport until the situation and protests are settled there.”

The protests, which have raged since June, entered a new phase this week with one of Asia’s busiest air travel hubs shut down, forcing the cancellation of hundreds of flights. Demonstrators who initially hit the streets to oppose a bill allowing extradition to the mainland now have a host of demands including the resignation of Hong Kong leader Carrie Lam.

InterContinental Hotels Group Plc, the U.K. owner of the Crowne Plaza and Holiday Inn chains, said the protests contributed to a slowdown in business travel in China. The company’s stock is down almost 10% from a record reached at the end of July.

Other companies with exposure to Hong Kong are also getting hit. Sun Hung Kai Properties Ltd., owner of the Four Seasons, and New World Development Co., which runs hotels including the Grand Hyatt Hong Kong, have seen their shares fall more than 20% from last month’s highs.

Room rates in Hong Kong are falling as a result of mounting safety concerns, according to the lawmaker, Yiu Si-wing.

A standard room this weekend at the upscale Conrad Hotel, owned by Hilton Worldwide and situated near a part of Hong Kong where protesters have tended to congregate, is priced at HKD1,530 ($195) – more than 40% cheaper than the same booking two months later, according to prices on its website. Conrad didn’t immediately respond to a request for comment.

“The recent travel advisories and warnings issued by several countries have caused some cancellations from our overseas leisure, group and corporate guests,” a Shangri-La Group spokesman said. “We have also seen a decline in the number of local patrons coming to our restaurants and outlets.” Bloomberg