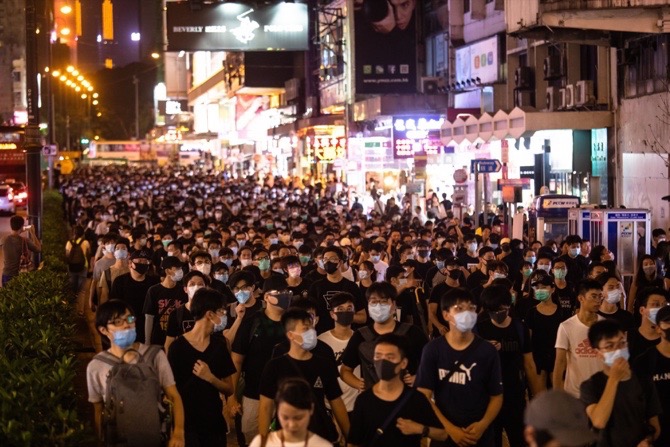 Hong Kong protest leaders vowed to return to the streets after the city’s leader declared her controversial extradition bill “dead,” suggesting her latest effort to resolve a weeks-long political crisis had backfired.

Demonstrators issued new calls for people to join their rallies despite Chief Executive Carrie Lam’s acknowledgment yesterday that the legislation, which would for the first time allow extraditions to China, wouldn’t get passed. Although it’s the closest she’s come to admitting defeat after an unprecedented wave of unrest – including the ransacking of the city legislature last week – she stopped short of agreeing to protesters’ demand to withdraw the bill.

“The bill is dead,” Lam told reporters yesterday in Hong Kong. “Our work on the extradition bill amendment is a complete failure.”

Lam’s refusal to formally retract the proposal left open the possibility that the government could revive it with 12 days’ notice and provided a new rallying point for a protest movement that has persisted through repeat marches, extreme heat and tear gas volleys from police. Opponents of the bill planned another rally Sunday in East New Territories district of Sha Tin, in an attempt to show support far from the city center.

“She’s only putting oil on the fire,” Civic Party lawmaker Kwok Ka-ki told reporters yesterday. “We will anticipate more outcry, more people coming out to the streets to demand for democracy in Hong Kong.”

The legislation has helped unify the former British colony’s once-fractured opposition, drawing hundreds of thousands into the streets and illustrating a source of domestic weakness for Chinese President Xi Jinping in the middle of a growing strategic struggle with the U.S. Lam’s attempts to quiet the unrest – first “pausing” efforts to pass the legislation, then apologizing – have only fueled more protests.

Besides demanding the complete withdrawal of the bill, opponents want Lam to resign and drop charges against demonstrators arrested during police clashes. Protesters mustered one of the largest marches ever in city’s Kowloon district Sunday, even after the decision by some protesters to break into and vandalize the Legislative Council chamber drew widespread condemnation.

The turmoil has raised new questions about Hong Kong’s long-term viability, almost halfway through China’s 50-year promise to preserve capitalist markets and personal freedoms established by the British. Lam and her backers in Beijing so far appeared determined to hang on, or risk emboldening an opposition bent on slowing their agenda and securing a direct election for chief executive.

“Stepping down is not an easy thing,” Lam said, in response to a question about whether she planned to resign. “I still have the enthusiasm and responsibility to serve the public. I hope the public can give my team and myself a chance and space to implement a new administration style.”

The legislation would let Hong Kong enter one-time deals to transfer criminal suspects to various jurisdictions, including mainland China. The measure fanned worries among the business community and the city’s democracy advocates about the erosion of the “one country, two systems” framework set up before Hong Kong’s return to China.

Hong Kong’s dollar fell back into the weak half of its trading band as traders predicted the city’s recent liquidity squeeze is nearing its end, though there was no indication Lam’s remarks had impacted the move.

Leaders of student groups that have participated in recent protests also rejected an offer from Lam for public talks to reconcile their differences, saying any such meeting must focus on their core demands. Some activists pointed out that four of the five student leaders who Lam met with during a previous bout of mass protests in 2014, when she was the city’s No. 2 official, were later prosecuted for their roles.

“Carrie Lam’s invitation for dialogue is a trap,” said Jimmy Sham, a leader of the Civil Human Rights Front, which has organized the biggest recent protests. “Carrie Lam said she has repeatedly reflected on her work and apologized, but a key thing she hasn’t reflected on is that there’s no one in Hong Kong who trusts her, and she hasn’t contemplated why nobody has faith in her.”

Lam has failed to heal divisions in the former British colony two years after taking over from her unpopular former boss, Leung Chun-ying, who was forced to forego seeking a second term due to widespread discontent. While Lam may have underestimated the opposition to her extradition bill, her task was complicated by the requirement to serve two masters – Hong Kong and Beijing – without a public vote to provide a mandate.

Billy Gung, a 27-year-old accountant who has attended the largest recent protests, said the extradition bill was a piece of the bigger political problem. “Even if the extradition law is dead, there will be other bills in the future that favor Beijing and are not in the interest of Hong Kong,” Gung said. Natalie Lung, Carol Zhong & Kari Lindberg, Bloomberg