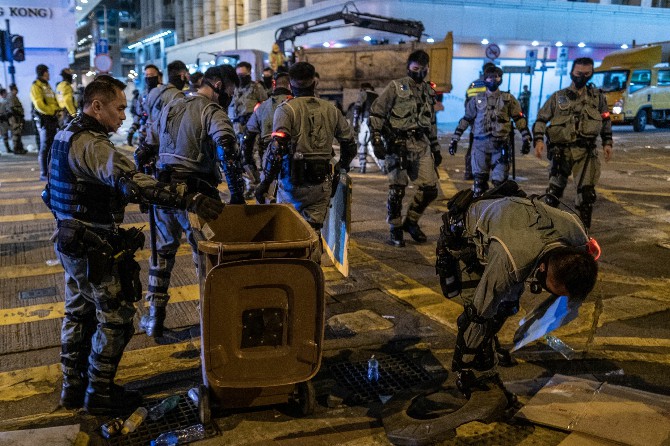 Hong Kong police officers have racked up nearly 1 billion Hong Kong dollars in overtime wages and other allowances as they work long hours to handle unprecedented pro-democracy protests in the Asian financial hub.
Roughly 11,000 officers per month were paid more than HKD950 million ($122 million) for extra shifts between June and November, according to a document uploaded by the city legislature’s Finance Committee. The Hong Kong Police Force’s total budget for wages, allowances and other operating costs in the current fiscal year was HKD20.2 billion, the document said.
Hong Kong’s government said in a reply to a lawmaker’s request for more information on police pay that officers had been required to cover more than 900 protests, processions and public meetings since early June, “many of which eventually turned into illegal acts of violence.”
The police said in a statement on Friday that they “deploy manpower as appropriate” and overtime work by officers “may only be undertaken when it is strictly unavoidable.”
Although the impact of the historic protests have already shown up in sharply reduced retail sales and tourist arrivals, the new figure is the first real glimpse at the extra policing costs. Thousands of officers have deployed nearly every weekend since the unrest began six months ago, while running street battles with protesters often stretch into the early hours.
The former British colony has been gripped by demonstrations since June, when large crowds took to the streets to oppose a bill that would have allowed extraditions to mainland China. Although Chief Executive Carrie Lam’s government eventually withdrew the legislation, the rallies have continued and turned increasingly violent and disruptive.
“During the ongoing conflicts in the past few months, front-line police officers had to handle massive and unlawful violent acts in various districts on the one hand, and to maintain regular police duties and public services in the territory on the other,” the government said in its statement.
Hong Kong’s police have been criticized by human rights groups, including Amnesty International and foreign lawmakers, for aggressive tactics, which the police have argued are simply a response to violent acts on the protesters’ side. Iain Marlow & Aaron Mc Nicholas, Bloomberg