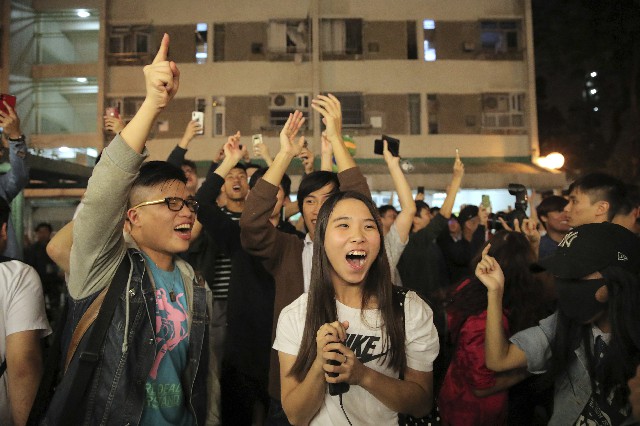 Hong Kong residents handed an overwhelming victory to pro-democracy candidates in a vote for local district councils on Sunday, a stunning repudiation of the city’s Beijing-backed government after months of increasingly violent protests seeking meaningful elections.
Pro-democracy candidates won 86% seats of the 444 seats counted as of 9 a.m., official results showed, with eight seats still up for grabs. In the last election in 2015, they had won about a quarter of all seats. The pro-government camp won about 12% of seats this time around, versus 65% four years ago. The vote saw record turnout of 71%, with more than 2.94 million people casting ballots – roughly double the number in the previous election.
The vote came at a time of unprecedented political polarization in the city, with divisions hardening as the protests become more disruptive and the government refuses to compromise. While the district councils are considered the lowest rung of Hong Kong’s government, the results will add pressure on the government to meet demands including an independent inquiry into police abuses and the ability to nominate and elect the city’s leader, including one who would stand up to Beijing.
“The government respects the results of this election,” Chief Executive Carrie Lam said in a statement yesterday. “I am aware there’s lots of analysis about the results among the community, which said the results are a reflection of the public’s dissatisfaction towards the current situation and deep-seated problems in society. The government will listen to the public’s feedback with humility and reflect on it.”
Speaking to reporters in Japan, Chinese Foreign Minister Wang Yi said the result wouldn’t change the fact that Hong Kong is part of Chinese territory. Leaders in Beijing have accused the U.S. and U.K. of meddling in Hong Kong affairs, and refuse to allow the city to have a leader who won’t be accountable to the central government.
“Any efforts to create chaos in Hong Kong or to damage Hong Kong’s stability and prosperity will not succeed,” Wang said.
The district councilors have few real powers, mostly advising the chief executive on matters like fixing up parks and organizing community activities. Most importantly, they help appoint 117 of the 1,200 electors who select the chief executive, which would give pro-democracy forces more choice over candidates who must still be approved by Beijing.
The result will make it harder for establishment forces to put in their preferred candidate in the next race for chief executive, said James Tien, a former pro-establishment lawmaker.
“It will be very difficult for government to manage a win, and then I think it’s more difficult to govern right now,” he told Bloomberg Television yesterday. If the violence dies down after the vote, he said, the government will have “no excuse” not to appoint a commission of inquiry by January.
The vote shows dissatisfaction with Lam’s government following months of protests triggered by legislation allowing extraditions to mainland China, which has since been withdrawn. Unhappiness with the administration rose to 80% from just 40% a year ago – well before the unrest began – according to surveys by the Hong Kong Public Opinion Research Institute. Lam’s popularity has fallen to record lows as the protests evolved into a wider pushback against Beijing’s grip.
Hong Kong “is at the precipice” and could fall off if authorities don’t heed the message of the vote, said Steve Tsang, the director of the China Institute at London’s School of Oriental and African Studies and the author of several books on Hong Kong.
“An overwhelming majority of voters have sent a clear signal: they want their Hong Kong back,” Tsang said. “It’s now time for the government in Hong Kong to hear what people have said and use this electoral result and the way this election has happened as a basis to work for a political solution.”
The vote has been closely watched around the world, particularly as U.S. lawmakers look to support the protesters while President Donald Trump seeks to finalize a phase one trade deal with China. Trump on Friday declined to say whether he would sign a bill that passed Congress with near-unanimous support, saying he supports both the demonstrators and Chinese President Xi Jinping.
Elizabeth Warren, a leading Democratic candidate for president, said the vote sent a “powerful message that they want to keep their democracy – and Beijing must respect that.”
Among the early winners were Civil Human Rights Front organizer Jimmy Sham, who was previously hospitalized after he was attacked by hammer-wielding thugs. Starry Lee, chairwoman of the Democratic Alliance for the Betterment and Progress of Hong Kong, the city’s largest pro-Beijing party, won her re-election even though many other pro-establishment figures lost.
“The high turnout rate did benefit the pro-democracy camp,” said pro-democracy candidate Kelvin Lam, who won after standing in for activist Joshua Wong, who was banned by the government from participating. “The result is like a referendum of the current administration, like a confidence vote.”
The election unfolded peacefully despite concerns it could be delayed or disrupted by violence following unrest in the leadup, with voters facing unusually long lines at polling stations across the city. Its elections have typically been plagued by low voter turnout and aren’t hugely competitive, compared with those for the Hong Kong’s more powerful Legislative Council, which is due for an election next year.
“I came out to vote because of the current situation in society now,” said Ken Lam, 19, a student and first-time voter. “The government is ignoring voices in the public. Policy-making lacks transparency in every aspect.” Julia Fioretti, Iain Marlow & Fion Li, Bloomberg 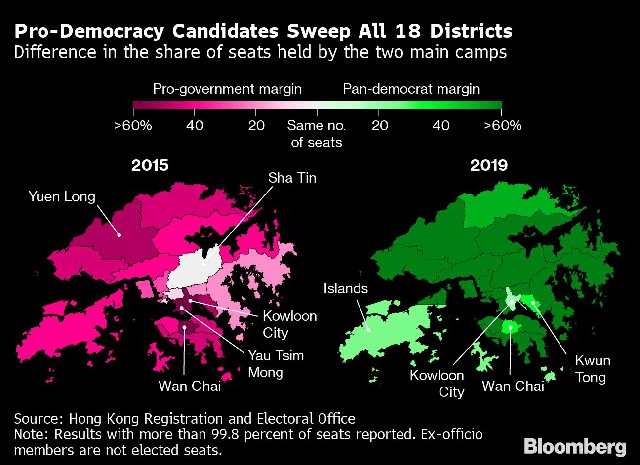 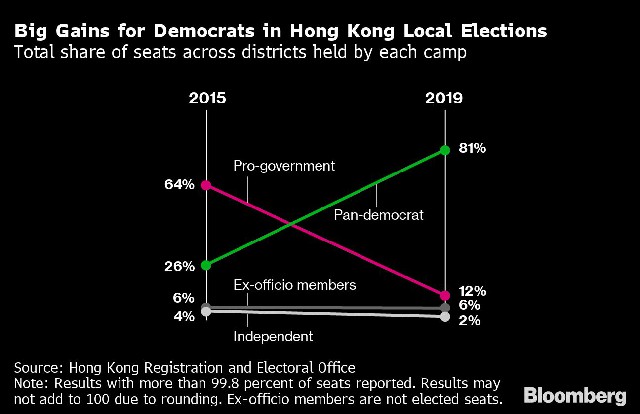