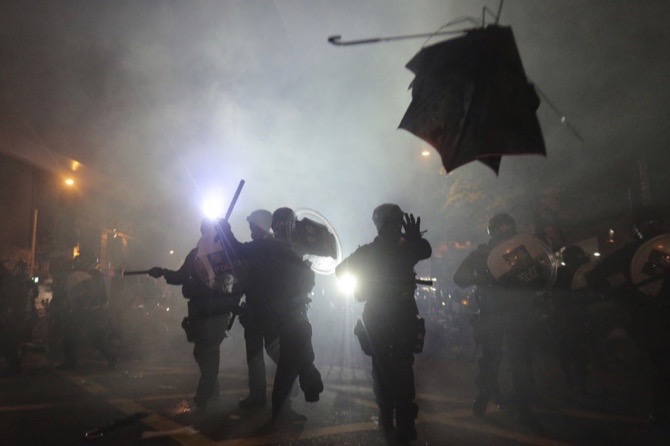 From stick-wielding mobs who attacked activists to one pro-independence group accused of stockpiling explosives, the latest unrest in Hong Kong has prompted new fears that protesters and the China-backed government are heading toward a violent confrontation.

In one case, Hong Kong residents – many wearing the black shirts favored by protesters – were attacked in a train station near the mainland border by groups of men wearing white shirts. In a separate episode, police arrested three men after finding volatile explosives and separatist campaign material in a raid on an industrial area.

Elsewhere, police fired tear gas at protesters who had surrounded China’s local government headquarters, defaced the national emblem, declared a provisional legislature and spray-painted the exterior with slogans like “Liberate Hong Kong” and “Revolution of our time.”

The incidents were part of the seventh-straight weekend of protests in the former British colony, and illustrate the fact that there is no simple solution to the ongoing political chaos. On Sunday, as a peaceful rally of more than 100,000 people devolved into running street battles on opposite sides of the city. The developments not only increased the risk that bystanders could be swept into the escalating political disputes, they drew the harshest warnings yet from Beijing, which said that protesters were testing its “bottom line.”

“It’s definitely a turning point in Hong Kong politics and history,” said Alvin Yeung, an opposition lawmaker who heads the city’s Civic Party. Yeung noted that Hong Kong, despite years of dissent over Beijing’s rule, was one of Asia’s safest big cities. “Last night was an exception. And that’s why it’s so shocking. It’s completely out of control,” he said.

The events showed that positions hardening on both sides as the city’s embattled leader, Chief Executive Carrie Lam, resists calls to resign despite protests exceeding 1 million participants. What began as a largely leaderless effort to block legislation allowing extraditions to the mainland has expanded into a list of demands including investigations into police tactics to a direct vote to replace Lam.

With more rallies planned for as early as this weekend, and little sign that either side will accede to the others’ demands, activists and government supporters alike have been warning that the further unrest could lead to ever greater injuries. A handful of suicides by protesters in recent weeks have already added life-and-death stakes to the debate.

The financial hub is also starting to grapple with the economic cost of continued unrest, which already risks keeping local shoppers away and deterring mainland visitors. Last week, police clashed with protesters inside a shopping mall in suburban Sha Tin.

The attacks Sunday on passengers and bystanders at a train station in Yuen Long by unidentified groups of men further raised alarm that the unrest could begin to effect regular people. “Clashes might be expected during a protest, but no one expected the elderly, children, pregnant women and former news reporter that had not joined the protest, might be attacked by pro-Beijing gangs,” democracy advocate Joshua Wong told Bloomberg News.

The Hong Kong General Chamber of Commerce, which says it represents businesses employing a third of the local workforce, called for a formal withdrawal of the extradition bill and the setup of a commission of inquiry to examine the facts surrounding the ongoing tensions and their escalation.

“Protests are becoming increasingly confrontational while factions are being created that pit citizen against citizen,” the chamber said in a statement yesterday. “The situation is also raising concerns in Hong Kong and internationally about our commitment to the basic law and the rule of law.”

Lam’s efforts to resolve the crisis, including declaring the extradition bill “dead,” have so far only prompted further protests. At a news conference yesterday, she condemned the vandalism at the Liaison Office while promising to investigate the attacks on activists, warning that “the whole of Hong Kong and its people will suffer as a result of the loss of order.”

The South China Morning Post newspaper reported last week that Chinese officials in charge of Hong Kong were working to present leaders with a comprehensive strategy to resolve the crisis. Authorities have ruled out any military intervention and saw the police as key to maintaining stability and exposing the intentions of protesters, the newspaper reported, citing people familiar with the discussions.

A broader solution appears increasingly out of reach as protesters turn their ire from the local government to China. President Xi Jinping has warned that challenges to Beijing’s sovereignty over Hong Kong won’t be tolerated and efforts to allow direct elections have been stalled since pro-democracy lawmakers blocked Beijing’s proposed system for choosing candidates in 2015. Demonstrators ransacked the city’s legislature building on July 1, the anniversary of its return to Chinese rule.

Protesters risked further provoking Xi by bringing the chaos directly to the doorstep of Communist Party authority in Hong Kong, the central government Liaison Office. Riot police pursued the protesters past high rises and across highways to outside the ferry terminal, where they fired tear gas after some activists hurled projectiles.

China’s top representative in the city, Wang Zhimin, denounced the protesters’ acts as “villainous and wicked” in a news briefing. The party’s flagship People’s Daily warned in an editorial yesterday that protesters at the liaison office “openly challenged the authority of the central government.”

Some lawmakers warned that the growing focus on Beijing risked jeopardizing the delicate framework that have allowed Hong Kong to exist as a pocket of free expression and free markets in China.

“The violent attacks on the liaison office have gone way beyond the protests against the rendition bill,” said Regina Ip, a pro-Beijing lawmaker and member of Lam’s Executive Council. “These rebels must stop these provocative actions, which will seriously damage the relationship between the central government and Hong Kong.” Iain Marlow, Bloomberg 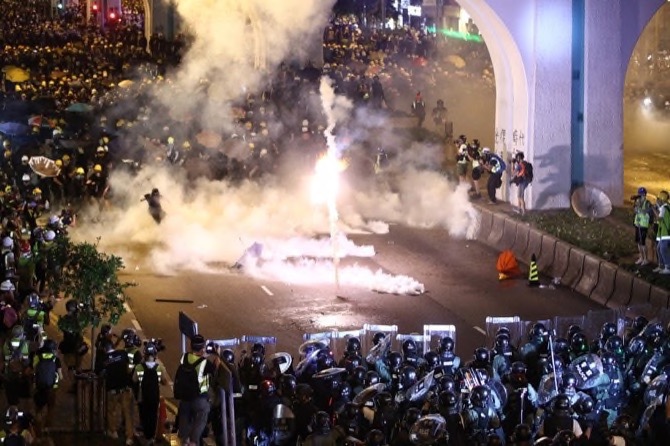 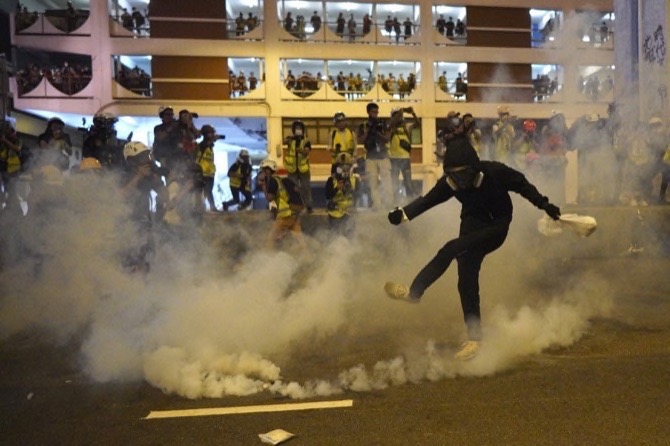