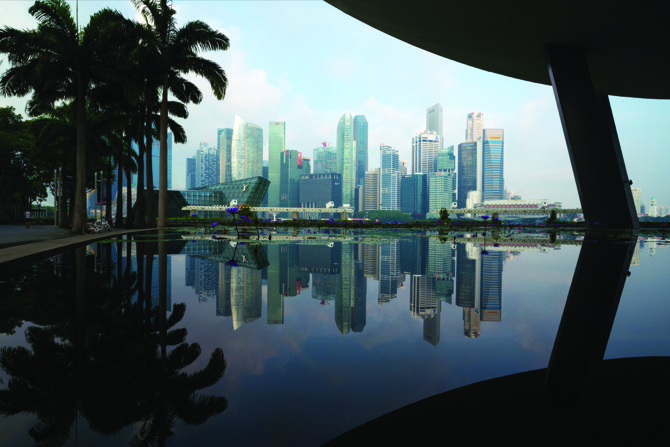 Student Chelsie Lee landed in Singapore from the U.K. last week, prepared to spend 14 days of mandatory, coronavirus-related isolation at home. Instead, she was whisked away to a five-star hotel on a resort island.

For a fortnight, courtesy of the government, she’ll wake up to a sea view in a room that would normally cost hundreds of dollars a night. Welcome to quarantine, Singapore-style.

The government said last week it’s placing residents returning from the U.S. and the U.K. in hotels to prevent them from potentially spreading the virus to their families, a measure that’s tighter than one that earlier allowed them to serve the period at home.

For Lee, that meant waking up on Friday to a room-service breakfast of scrambled eggs, sausages and hash browns served with croissant and toast as she enjoyed the view from the balcony of Shangri-La’s Rasa Sentosa Resort and Spa.

“I have a king-sized bed to myself,” said Lee, a 21-year-old law student at the University of Warwick. “And since my room is on level eight, I have a good sea view. I can see the beach, the swimming pool and cable cars. It’s quite nice.”

Singapore has seen a spike in infections, largely involving individuals with recent travel history, and those returning from the U.K. and the U.S. account for the largest number of cases. The country gets about 1,200 residents returning just from the U.K. and the U.S. every day, National Development Minister Lawrence Wong told parliament last week. On Saturday, confirmed infections climbed by another 70 to 802, with more than half classified as imported cases.

To prevent community spread, the government said on March 24 it’s working with hotel operators to provide “dedicated facilities” for such returnees, while those currently serving their notices in their homes could also apply for those rooms. They are provided with meals and laundry too – and all on taxpayer dollars.

Singapore has booked more than 7,500 hotel rooms and serviced apartments to house returnees, according to property website 99.co. Some of the hotels enlisted include those belonging to international luxury chains such as Hilton Worldwide Holdings Inc., InterContinental Hotels Group and Accor SA, it said.

Rasa Sentosa is providing, along with several other hotels in Singapore, a dedicated facility for returning residents to serve out their stay-home notice, a spokesperson said.

The government measure will go some way in supporting Singapore’s hospitality industry, which has been hammered by the pandemic, with flights and visitor arrivals grinding to a halt. Bracing for an economic contraction that could be the worst since independence, the administration unveiled a second stimulus package last week that boosted assistance to an equivalent of 11% of gross domestic product. Support includes scrapping property taxes in 2020 for hotels, shops and other commercial properties.

A few levels below Lee is Yongchang Chin, who was pleasantly surprised to be handed a form when he landed in Singapore last week, stating that he too will serve his 14-day quarantine at the hotel.

“I felt really lucky, it was unexpected,” said the 25-year-old Singaporean, who is pursuing a Master’s degree in demography at the University of Oxford.

The Singapore Hotel Association couldn’t say how many hotels are involved in hosting overseas returnees. It had sent an invite to all members to participate in the initiative, a spokesperson said.

“We do not have any indication of the response from hotels yet,” the spokesperson said. “Hotels can choose to make this commercial decision at their discretion. This new measure will certainly help to alleviate the hotels’ financial pressure now that tourism demand is non-existent.”

Singapore earlier expected a 25% to 30% decline in tourist arrivals when the coronavirus hit China and its other major visitor markets. But as the city-state imposed tighter border controls, coupled with lockdowns in other nations, the outlook became darker. It stands in stark contrast to last year’s record arrivals of 19.1 million people. Tourism receipts rose to SGD27.1 billion ($19 billion) in 2019 based on preliminary estimates, from SGD26.9 billion the year before.

Lee said that upon landing in Singapore on Thursday evening, passengers had to fill up forms acknowledging they’ll abide by quarantine rules. The form listed the hotels they will be put up in, but they didn’t get to choose, she said.

“It’s really good to be placed in a hotel as I had a lot of work to do,” Lee said. “But I also didn’t expect the government to place us in a nice hotel.”

Checking in took all of five minutes. The travelers took their luggage from a coach chartered to transport them, queued up a meter apart as per social distancing guidelines, and received room key cards. They were given welcome snacks – packets of biscuits – before they were shown to their rooms.

“When they serve the food, the hotel staff will place it outside and ring the door bell,” Lee said. “When I opened the door, they’re not there. I guess they’re not supposed to come into contact with you.”

Family members are allowed to leave things needed by the returnees at the concierge. For Lee, her parents brought her a yoga mat and some snacks.

Those quarantined are not allowed to leave their rooms during the entire 14-day period and can’t use hotel facilities such as the gymnasium or swimming pool, Chin said.

Individuals under quarantine or issued stay-home notices in Singapore are monitored by video calls at least three times a day and officials conduct spot checks at their residences. For non-compliance, individuals face a maximum penalty of SGD10,000 fine and six months jail under the Infectious Diseases Act. A Singapore citizen had his passport canceled when he was found to have breached the requirements after returning from overseas.

Chin said the Immigration and Checkpoints Authority sends him text messages multiple times a day that “require you to click on a link and send your current location.”

While Lee would have preferred to be at home, she was concerned about carrying the virus and passing it to her family members. She’s been “impressed” by how the Singapore government treats its students returning from overseas, adding that friends from Hong Kong and China have had a tough time getting flights or must fork out extra fees to change flight timings.

“My friends said their governments are not really trying very hard to get them back home, but ours did and they put us up in hotels,” she said.

Lee’s biggest concern now: Motivating herself to be productive while staying in a five-star hotel because she has to complete “two essays due by the end of the month.”