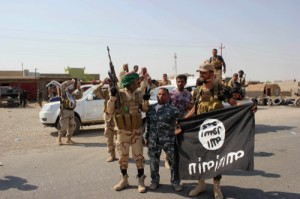 Shiite militiamen hold the flag of the Islamic State group they captured, during an operation in Iraq

Four suspected Islamic militants arrested in Indonesia over the weekend are members of China’s ethnic Uighur minority community and were trying to meet Indonesia’s most wanted extremist, authorities said yesterday.
Police said they were investigating whether the four had links to the Islamic State group in Syria and Iraq.
Dozens of Indonesians have traveled to the Middle East to join the group and other militant outfits over the last year, energizing the country’s long-standing extremist networks. Indonesian authorities, who have struggled against violent extremists for years, have woken up to the emerging threat in recent months. They have outlawed the Islamic State group, but have no laws to stop suspected militants from traveling abroad.
The four Uighurs were arrested Saturday in Central Sulawesi province, a major hotbed of militancy in the country.
National police spokesman Col. Agus Rianto said the four were arrested with three associates of Abu Wardah Santoso, a fugitive militant leader alleged to be behind the murder of several policemen and Indonesia’s most wanted terrorist suspect.
Rianto said police found stickers with the Islamic State symbol on them in the car the men were traveling in when they were arrested.
Authorities initially thought the four Uighurs were from Turkey, which has linguistic and ethnic ties with the Uighur homeland of Xinjiang, a region in northwestern China.
Xinjiang is home to a separatist insurgency that is infused with Islamist militancy. Uighurs are known to have traveled to global jihadi hotspots, including the Pakistani border, over the past 15 years.
Starting in around 2009, groups of Uighurs either involved in or affected by the violence in their homeland have traveled across Southeast Asia, many of them hoping to make it to Turkey to claim asylum from what they is persecution by Chinese authorities in Xinjiang.
Ridlwan Habib, a security expert at the University of Indonesia, said that Santoso was believed to have dispatched several followers to Syria in recent months, and that the four Uighurs could be linked to the Islamic State group. “Santoso’s jihadist group is in need of funds and weapons assistance from the outside, while the IS needs a proxy to widen its influence to Indonesia,” he said. Niniek Karmini, Jakarta, AP