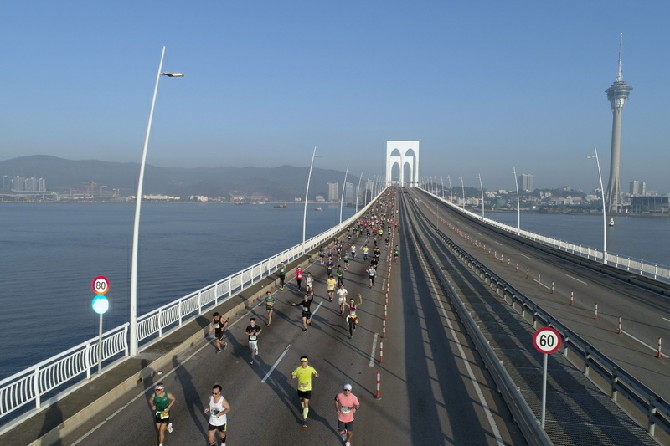 Pun Weng Kun, President of the Sports Bureau (ID), disclosed that his department has received inquiries on registering for the 39th Macao International Marathon from abroad.
The marathon that will be held this Sunday, which attracted 12,000 registrants, will only see runners from within the Greater China Region, Pun stressed on the sidelines of the press conference held for the purpose of promoting the annual marathon.
However, Pun explained that arrangements for the marathon will be different from the recently held Grand Prix (GP), adding that those foreign runners who have expressed their will to run in Macau will not be allowed in.
In the recent GP, foreign racers were allowed to enter Macau for the purpose of racing amid a ban on entry by foreign citizens. In the end, British racer Robert Huff was the only foreign racer who participated.
Therefore, this year’s marathon will be a race between runners from the Greater China Region.
The past five editions of the marathon were all won by foreign runners in both male and female categories. Coincidentally, the race records for both categories were renewed three years ago.
In contrast, this year’s marathon will be between runners from Macau, mainland China and Hong Kong.
Pun specifically remarked that some Hong Kong runners are competing in the race despite the mandatory need for self-paid quarantine upon their arrival in Macau.
The local race has also obtained support from various provinces in mainland China, according to Pun, to help with promoting and attracting runners.
Besides the main race, the organizing committee will also host two extended events to add an enjoyable tone to the celebration of the race. One them of them is the Most Creative Attire Award, which will only be open to participating marathon runners. The organizing committee will award the runner who dresses up most creatively.
Meanwhile, the collection of race bibs has commenced. Runners should collect their bibs until tomorrow from 12 p.m. to 10 p.m. at the Broadway Macau.
Road traffic will be impacted, as the track will be open for restricted access from 11 p.m. the night before the race. At 4 a.m. on the race day, the entire track will be closed to public access. It will gradually be reopened from 7 a.m. to 11 a.m. on the same day.