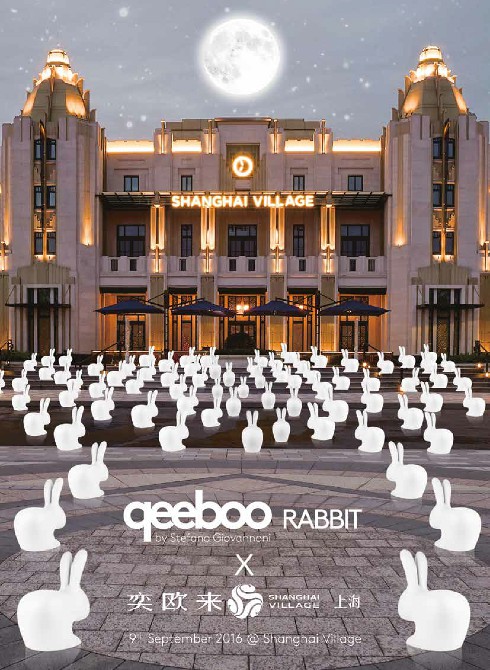 A poster for an exhibition at Shanghai Village in Shanghai in September 2016, showing the rabbit lanterns in question

The Italian designer Stefano Giovannoni, founder and CEO of design company Qeeboo, wants a company that he says unlawfully produced the rabbits used in the installation for the Mid-Autumn Festival in Macau to be identified and held liable.
As the Times reported on Tuesday, the exhibition has been removed from Praça de Jorge Álvares garden in central Macau after being criticized by netizens, especially those involved in art and design, for replicating a famous Qeeboo installation held in Beijing a few years ago.
Giovannoni told the Times that his firm did not give permission to a Macau entity to reproduce the concept in the SAR.
“We have requested information from the only company [to have] bought the rabbit lamps for the purpose of creating installations, which created the first installations on the bridge in Beijing in 2017 and in Shanghai Village [retail mall] in 2016. They informed me they are not responsible for this installation in Macau which was obviously created with counterfeit copies [thereby] infringing our copyright.”
According to Giovannoni, Qeeboo is now seeking information that will lead them to the company that produced the counterfeit items.
“We would like to file a lawsuit against the company that produced the copies,” the designer added.
Giovannoni believed that the Municipal Affairs Bureau (IAM) was not aware that the products were counterfeit when they acquired them but that they should have taken precautions to prevent it.
“Of course [the government entity] should have requested information about the authenticity of the products before buying [them],” he said.
After facing criticism from netizens, the “Rabbits and the Moon” installation was removed from the garden due to suspected copyright infringement, an anonymous source told the Times this week.
The Times attempted to reach the IAM for comment several times, but as of press time yesterday, the bureau had provided no official clarification regarding the exhibition’s removal, nor whether the products were acquired directly by the IAM.