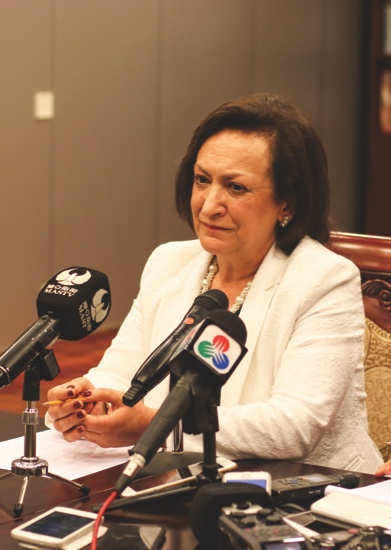 –  You said earlier that the Portuguese Prosecutions Office is available to continue cooperating with Macau SAR and to send Portuguese magistrates to work in the territory. Will there be any limit to the number?
– That number was not defined clearly. But it is certain that for the time being and with consideration to the short number of staff that the Portuguese Prosecutions Office possesses, we cannot allow a large number of magistrates to come [to the territory].
Another of the reasons that justifies why we didn’t establish a fixed ceiling is because the number available tends to be flexible. We hope that in the next 2, 3 or 4 years we would have more staff that will allow us, in case of solicitation by the MSAR Prosecutor, to consider the possibility of sending more. We will consider all the requests from the MSAR Prosecutor and we will attend to those within our own working circumstances.

– Are the magistrates currently operating in Macau going to be treated according to any transitory rule?
– Regarding those magistrates, their situation will be properly considered by the Superior Council of the Public Prosecutions Office, that is, I can’t really answer clearly what is going to happen. But I can guarantee that their cases will be fairly and properly considered.
There are several factors to consider including the fulfillment of the new requirements that have now been established. The Council will consider, according to the requests received, whether it is possible to decide the permanence and continuation of service of magistrates in this situation.

– One of the areas covered in the agreement is training. How will this cooperation formally take place?
– The training area was addressed in a more generic perspective. There is mutual interest from both Prosecutions Offices and there is an availability on the Portuguese side to allow Portuguese magistrates to come [to Macau] to perform training sessions within the framework of the Centre for Legal Studies (CEJ). There is also the possibility of the Portuguese MP hosting, for periods of time (not yet set), internships with a more practical nature, namely, allowing magistrates from the MSAR MP to follow the processes and activity in Portugal.
There are several possible approaches to training, including the establishment of a protocol between the two magistrates’ training schools or in a more direct way through cooperation between the MPs.