Labour Affairs Bureau estimates there are 4,800 vacancies for residents 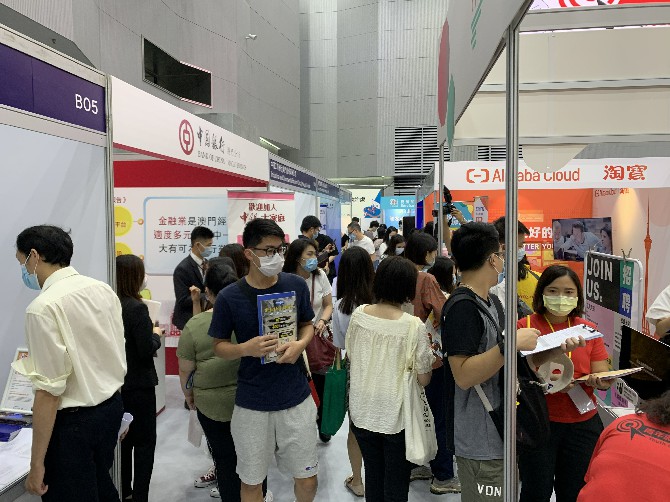 A scene from yesterday’s job fair organized by the DSAL

The Labour Affairs Bureau (DSAL) estimates there are about 4,800 vacancies in the Macau market that local residents would be prepared to take.
The estimate comes to reassure the public after the bureau admitted nearly 3,500 people have recently registered as having been “involuntarily dismissed” by their employers.
To further shore up employment opportunities for local workers, the bureau disclosed that it has deducted 13,000 places from existing non-resident worker quotas to emphasize the supplementary nature of the non-resident workforce and encourage employers to consider the local workforce.
When reviewing extensions of non-resident working permit applications, the bureau added that it would also check whether local workers are willing to fill the position first.
The DSAL expressly mentioned that if the position is favored or preferred by local workers, the bureau will not renew the non-resident working permit. It will also conduct stricter inspections and cross-reference with its database to ensure that local workers are being prioritized.
Although the DSAL said the measure was in already place, many jobseekers are still struggling to get hired, according to a report by local newspaper Macao Daily News. One jobseeker has not been hired since being laid off early this year. She wants to continue her career path in the sales industry. She expects a salary of between MOP13,000 and MOP14,000 per month, similar to her previous job.
At the press conference held for the Macau Youth Career Expo 2020 last week, the organizers revealed that the average starting salary offered by the participating employers was MOP14,600 per month. This jobseeker would have been looking at the minimum salary, even with experience in the field.
Nonetheless, the authority is still finding that jobseekers are aiming for salaries that are too high. The authority said it recommends jobseekers to adjust their expectations in order to find a job.
A human resources agency told the Chinese newspaper that with the economic downturn, jobseekers are becoming more concerned with getting a job than having a minimum salary expectation.
Monthly salaries have dropped by between MOP2,000 and MOP3,000 on average since the start of the year.
Furthermore, the bureau also said that more than 1,500 people have finished subsidized training. The bureau has referred 910 people to job matching services, 567 of which were hired by an employer.
Subsidized training is a scheme that was initiated by the government in response to the unemployment and underemployment situation caused by Covid-19. Two rounds of subsidized training have taken place so far, with a third round set to take applications from next month.
Local enterprises have also joined with the DSAL to operate an internship program. Through the program, 1,500 people were accepted by the participating enterprises as interns. At the conclusion, only five were hired by the enterprises they interned for.

During the first day of the Macau Youth Career Expo 2020, some 30 out of 1,990 jobseekers were hired and 122 jobseekers were interviewed on-site, the Labour Affairs Bureau (DSAL) disclosed. The two-day job fair concluded yesterday. It was held at the campus of the Macau University of Science and Technology, where participants were required to register in time slots to prevent a large congregation of people. According to the DSAL, over 3,000 vacancies were said to be advertised at the fair.