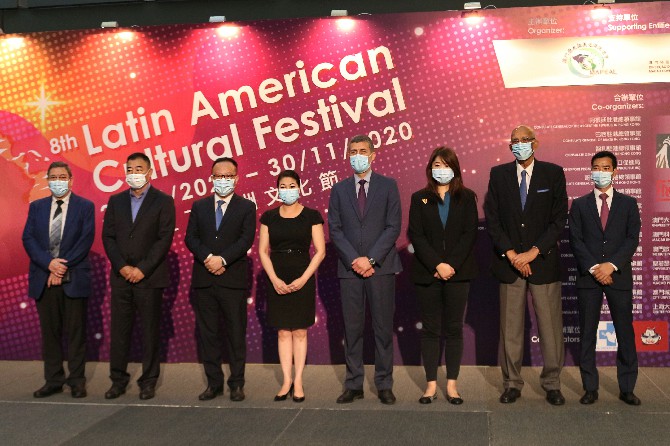 The 8th Latin American Cultural Festival in Macau kicked off yesterday with a ceremony held at the Macau Tower.
This year, the festival was forced to adjust its format, suspending the Food Festival component, which has been the major headliner in the past, the president of the Executive Board of the Macao Association for the Promotion of Exchange between Asia-Pacific and Latin America (MAPEAL), Sonia Chan Prado, said to the media on the sidelines of the inauguration event.
“The big difference between previous editions and this year is that the Latin American chefs cannot come to Macau and so we will have to suspend our favorite activity, the Food Festival,” Prado said.
However, the organizer affirmed that the festival will go ahead with a total of 10 other activities this year.
“We are going to have four photo exhibitions. The first one starts from today [yesterday] and that is related to the Latin American ancient civilization, to show to the public the culture of Latin American countries. After this exhibition, we will have another three that will aim to show to the public the long-lasting relations between China and Cuba, Chile, and Ecuador,” Prado said. The relationships are 60, 50, and 40 years old respectively.
At the end of this month, the festival will turn its efforts to a coffee appreciation event, called the Macao-Latin Coffee Festival. It will include the Latin American Specialty Coffee Manual Brewing Competition for the first time, in which 24 competitors will compete for the championship title. A free tasting of Latin American coffee will be held simultaneously at the venue, with Prado welcoming all coffee lovers in Macau to join the event on October 31.
On Saturday, November 7, there will be a series of events including a Latin music and dance party as well as several Latin dance (salsa) workshops. These will be complemented by a Wine and Spirits Festival which will feature not only wines but also Grappamiel, a special liquor from Uruguay made with honey, which will be tasted in Macau for the first time.
Speaking to the media, Prado said that MAPEAL insisted on holding the festival this year, even if it was an adapted version, to boost morale during these difficult times and increase local knowledge about Latin America, especially among the youth of Macau.
“Amid this difficult time, we still want to bring some fun and entertainment to the community, residents, and visitors and we also want to keep promoting the cultural links between Macau and the Latin American countries. This is our mission, we will try our best to continue doing this kind of cultural promotion event in Macau so more people get acquainted with the different Latin American cultures, especially the students that like to widen their horizons,” Prado said.
The organizer said that the number of participants this year is unknown and difficult to predict due to Covid-19 and the low number of visitors coming to Macau. Still, Prado is expecting “a few thousand” people to participate in the range of events on offer.