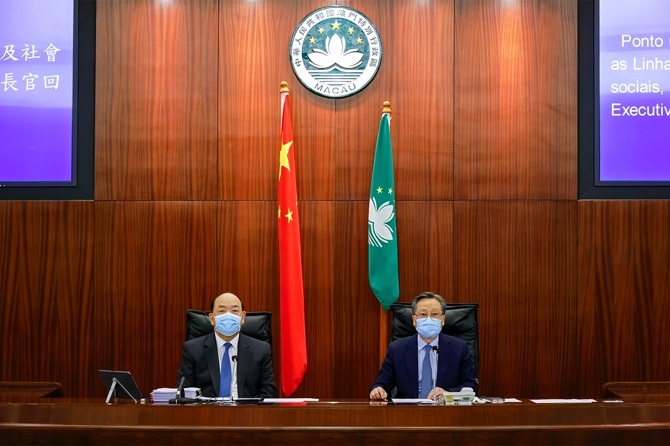 The second batch of financial support to local residents announced by the government in mid-July and which comprises a total of 10 billion patacas topped the list of concerns of lawmakers yesterday at the Legislative Assembly (AL), in a session solely dedicated to a mid-year Q&A with the Chief Executive (CE), Ho Iat Seng on the policy address for 2022.

Practically all the 31 lawmakers that posed questions to the CE addressed this topic in one way or another. Most of them wanted Ho to explain how the general subsidy to the residents would be operationalized.

On the topic, the CE explained that the Secretary for Economy and Finance, Lei Wai Nong, is still collecting feedback from the different sectors to finalize the rules. In doing so, the aim is to ensure that, this time, all local residents will be included.

“On July 16 we published a report that clearly explains our direction and purpose for this second batch of MOP10 billion. It was very clear (at that time) that these are measures of general support for all residents of Macau,” Ho said, refuting the idea that the government is taking too long to put these measures into practice.

“It is not taking too long. We need to hear the [opinion of] society and several associations and people have been presenting their opinions to the Secretary. We will analyze all of them.” Ho explained that only after the first batch of another MOP10 billion in subsidies is distributed – most of which will be oriented towards workers who were laid off or temporarily unemployed over the past three years – will the government initiate preparations for the second batch.

“It was only on August 3 that we were able to be cleared of the classification as a high-risk area for Covid-19 infection, so we need to wait a little more and calculate a way to find [financial] support for these measures. It’s not just about making measures; we also need to see if there is enough support to implement them.”

Responding to those who criticized the government for providing a slow response, the CE said that the government has, in fact, “rushed the work to be able to deliver [from August 17] the first batch of the economic relief directed to those more in need.” The CE explained that otherwise, if the normal procedures were followed, such money would only be available to be distributed by October or November this year, after the legislative summer break.

Taking into account the need to submit a new amendment to the 2022 budget law to include the new subsidies batch and accompanying work, the CE said the government would probably only be positioned to release this general subsidy by November or December this year.

Questioned by lawmaker Chui Sai Peng on progress on the public administration reform, the CE said that his government has been accelerating work on the much-needed reforms. Furthermore, thus far in the almost three years of governing, restructuring has been enforced on a total of 30 public services, four of which have been canceled.

Regarding public funds, Ho said that this government has promoted mergers and changes that reduced the previous 23 funds to the current 18.

Promising to continue to enforce the quota of around 34,000 civil servants, the CE said that the government has been putting efforts into electronic government tools to “alleviate the pressure on frontline workers.”

“For this year, we will propose the amendment to the Statute of Personnel of the Public Administration of Macau (ETAPM). This will be presented to the AL in August [this month].”

In a reply to lawmaker Ma Io Fong, the CE also confirmed that the public housing project initially planned for the Avenida de Wai Long will be reclassified, moving from a general economic housing project to a special project aiming at the so-called “sandwich class” – that is, the intermediate class that does not meet the criteria to apply for economic subsidy with public housing acquisitions but who also lack the financial capacity to attain a housing unit on the private market.

On the topic, Ho said that most likely the Wai Long project would be reclassified to target this intermediate class that comprises most of the younger generations.

This comes from the fact that a study commissioned by the government and conducted by the University of Macau has found that the 24,000 units being built at Zone A of the new landfills would be sufficient to fulfill the needs of the eligible residents.

“The younger generations are also mostly working in the Cotai area, so this housing project [at Wai Long] may be more suitable for them,” Ho said, noting that the project is currently at the design stage and will be subject to further changes regarding the number of housing units available. This is due to the need to increase the living area of the apartments so they are close to the floor area typical of the private housing market.

The CE also said that the government aims to deliver the bill to regulate access to this new type of housing by the end of this year.