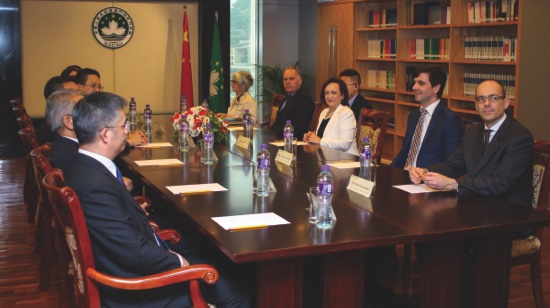 The Portuguese Public Prosecutions Office is open to maintaining cooperation with Macau in judiciary matters and more specifically to maintaining Portuguese magistrates in the territory, said the Portuguese Attorney General, Joana Marques Vidal, in a press conference held yesterday.
The Attorney General added that this cooperation mostly depends on the MSAR’s request to Portugal.
During a meeting held yesterday between the Attorney General and the local Prosecutor General Ip Son Sang, Vidal said that the agreement between Macau and Lisbon includes clarification of the criteria that allow the Portuguese Public Prosecutions Office magistrates to continue working in the MSAR.
The two parties agreed that the Portuguese entity could organize a list of candidates that would be sent to the Macau Public Prosecutions Office, which could then choose the candidate or candidates who best suit the needs of the territory.
Another of the most significant changes relates to the duration of the magistrates’ tenures in Macau. From now on, Portuguese magistrates operating in Macau will have a fixed tenure of four years, which could be renewed for a total combined tenure of eight years.
Vidal also said, “Whenever one of these commissions expires, the magistrate will be replaced by another, if that is requested by the Macau MP.”
Another topic addressed in the meeting related to the strategies to fight corruption, an issue that will also be targeted for further cooperation. This would be established through training and internships in specific areas, with Macau prosecutors to undergo training with the Portuguese MP’s Central Department of Investigation and Penal Action (DCIAP).
Ip Son Sang said that the meeting addressed “matters and judiciary problems of common interest and specially in what concerns the operations of both MP institutions.” He noted that there “was not yet any signed formal agreement.”