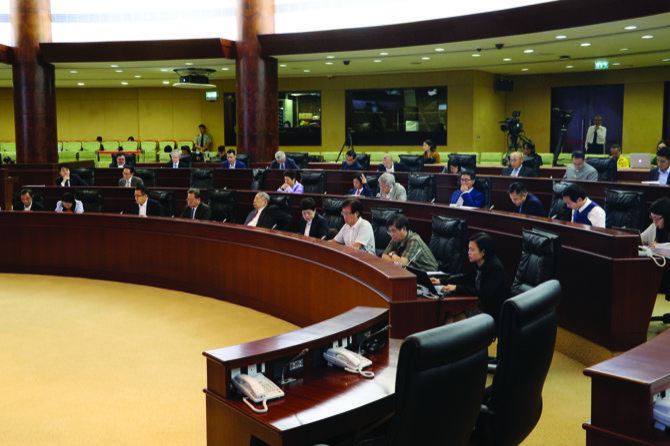 Discussion over the creation of an investment company, in which the government intends to inject a total of 60 billion patacas from the public reserves, dominated the Legislative Assembly (AL) plenary session yesterday afternoon.

The Chief Executive had attempted to remove the topic from the agenda, as announced on Monday at a special press conference that he called. The item presented an opportunity to discuss and vote upon the first reading of the “2019 budget amendment” bill that is necessary for the money to be injected into the company. The discussion indeed occurred, although most of it took place outside of the agenda.

Since the request had been presented to the AL with only 48 hours’ notice before the date of the discussion and the bill was already in the AL’s possession, it was necessary to proceed with voting by lawmakers through simple a deliberation on whether the Chief Executive’s request would be accepted.

Before the voting occurred, several lawmakers took the opportunity to express their feelings about the bill itself, beginning with Sulu Sou. On the same day, Sou had also submitted a letter to the president of the AL, Kou Hoi In, to suspend discussion on the topic.

Despite agreeing with the suggestion to suspend discussion and voting on the proposed budget amendment bill, Sou did not agree with the procedure used by the Chief Executive.

“This practice [of sending a letter to the AL] is not correct,” he said while accusing the chief of the government of disrespecting the political powers and competence of the Assembly.

Sou explained at length why he believed that the Chief Executive was “abusing” his powers by calling for the removal of a topic from agenda, a power Sou claims is held only by the president of the AL. Dropping the bill can only be proposed by the proponent of the bill, in this case, the Secretariat of Economy and Finance, led by Lionel Leong.

Sou also took also the opportunity to express his disregard for the government’s disrespectful attitude in not sending a representative to the AL to justify the reason behind their decision.

“The AL does everything they say without questioning. They treat this house as a warehouse,” said Sou.

Although the time was intended for addressing thoughts on the Chief Executive’s request itself, eventually the discussion came to encompass details of the bill, with Sou, José Pereira Coutinho, Ng Kuok Cheong and Agnes Lam remarking that the proposal to create the investment company had many problems: it did not fix a ceiling for investments; fell short in justifications for how and where the money would be invested; and had a lack of accountability mechanisms for fund managers and guarantees on the return on investments.

Ng recalled that until the present moment, government participation in all the other companies and funds amounted to a total of MOP7 billion. He regarded this as a very low amount when compared with the proposed fund, which, unlike previous companies, has made no guarantees, limits or contracts establishing guarantees of return.

According to Ng, “this looks just like the retirement package bill that will be voted down and will take the local people onto the streets,” he said in reference to mass demonstrations that were held in 2014.

“I advise the Chief Executive not to try to present this again for 2020,” he added. “It looks like [the government] is taking its legislative initiatives [in the manner of] ‘grasping at straws’.”

Interrupting the series of interventions was lawmaker Vong Hin Fai, who tried to express that in his opinion, the requests to the AL were legal according to the provisions of the regiment. The lawmaker noted that, “according to the regiment we should be just voting on the removal of the points [from the agenda]. We should not be discussing the bill itself or any of its details.”

“At a later opportunity, for sure the government will come and explain [the bill],” remarked Vong. “This is my understanding.”

Defending the government and the bill itself was lawmaker Lao Chi Ngai, who said that the idea to create the investment company came from a suggestion from the International Monetary Fund (IMF), noting that the government was, “just fulfilling its promise and compromises.” However, Lao noted that he also agreed with the elimination of the point from the agenda, as requested by the Chief Executive, “so the government can have time to clear all doubts.”

In reply to Lao, Pereira Coutinho remarked that the establishment of such a fund should follow “the Santiago Principles” – a group of rules that promote transparency, good governance, accountability and prudent investment practices from sovereign wealth funds. He said that for that to happen, “society needs to know everything about it.”

Following the long discussion, the topic of the 2019 budget amendment was finally removed from discussion by unanimous vote, along with point seven of yesterday’s agenda in relation to discussion and voting on the first reading of the “cybercrime bill,” which was also included in the Chief Executive’s request.

The justification for the withdrawal of the cybercrime bill was that the secretary would not be available to present the topic and reply to questions on it due to their absence from Macau on the day the discussion was scheduled.

Before the end of the topic, there was still time for some lawmakers present their vote declarations. During this period, Lam recalled that the investment funds belonged to the population and so the population must be heard and called upon to decide on particular aspects.

Lawmaker Ella Lei shared a similar opinion, remarking for the guarantee needed, supervision and inspection of the activities of the fund would have to be enforced.

On the other hand, Pereira Coutinho took the opportunity to recall the case of failed airline Viva Macau, where the government lost the money invested and claimed not to be able to recover it by legal means. He reaffirmed that the justifications given by the Chief Executive at the press conference on Monday were “just bad excuses” and asked: “Why were the people not consulted before? Why were lawmakers not consulted before? Is the government looking to create another scandal?”

Finally, Song Pek Kei, Lao and Pang Chuan commented on the perceived “inconsistency” in opinion from some lawmakers, saying that, “In the past [these lawmakers] have been criticizing the government for the lack of application of reserve funds and low return on the ones invested, but now also raise problems when the government tries to apply those reserve funds.”

Lawmaker Ho Ion Sang was yesterday elected as the Legislative Assembly’s Second Secretary, collecting 25 out of 32 possible votes from his peers. Ho’s election comes after the former Second Secretary, Chan Hong, was elected as the new First Secretary last month, filing the vacancy left by Kou Hoi In. Kou has become the new President of the Legislative Assembly. Besides the 25 votes with which Ho wrapped up the election, there were also three blank votes and one vote each for Ella Lei, Chan Iek Lap, Ma Chi Seng and Cheung Lup Kwan. After the election, Ho accepted the new role promising to fulfill it with modesty and gratitude.